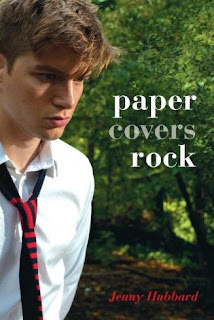 Summary (from the inside flap of the book): Sixteen year old Alex has just begun his junior year at a boys' boarding school when he fails to save a friend from drowning in a river on campus. Fearing the consequences if they reveal the whole truth about what happened, Alex and his friend Glenn, who also witnessed the accident, decide to lie. Plagues by guilt, Alex takes refuge in the library, telling his tale in a journal he hides behind a copy of Moby Dick.

But the boys were not the only ones by the river that day. In the midst of their panic, Miss Dovecott, a young English teacher fresh out of Princeton, happened to arrive. Over the next few weeks, Miss Dovecott begins to recognize poetic talent in Alex; she helps him find his voice, and he is thrilled by his teacher's special attention. But when it becomes obvious that Miss Dovecott has noticed glimmers of guilt in Alex's writing, Glenn is convinced that she is out to get them. Now Alex must choose between his friend and his mentor. but every decision has its consequences.

Review: This book is definitely more than it seems to be once the reader gets to the end. I do wish some of that had come out a little earlier, but then the ending wouldn't be as powerful as it is.

I do think the connections to Moby Dick are confusing. I haven't read the book, but at least I know some basics (Ismael, Herman Melville, it's a whale, etc), but I wonder if high school students would be overwhelmed by this aspect of the novel.

Alex is a great character, he is caring, sensitive, and in many ways is a typical teen. He has friends, but is weary of them. He doesn't love boarding school, but wants to do well. He isn't a "school boy", but discovers he has a talent and passion for writing. I did like the storyline of the writing and how the other story, of Thomas' death, is paralleled and revealed through Alex's school assignments.

Thomas' death is tragic and one can easily see how it could happen. I remember cliff jumping when I was going to summer school in Vermont one summer. I didn't drink while we did it, but others did and I realize now how lucky we were that no one ever got hurt. But that is part of being young, death doesn't seem possible or real. And guilt. Alex is going to carry that with him his entire life; could he have done something to change what happened? This is a great question that is handled well in this book.