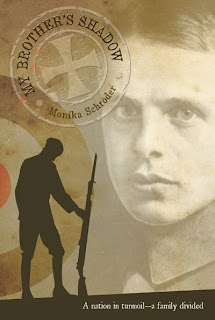 Summary (from the inside flap of the book): Berlin 1918: World War I is drawing to a close, and Germany is torn. No one knows this better than sixteen-year-old Moritz, whose family is as divided as the nation. His father died in the war and his brother still risks his life in the trenches. His mother, intent on sweeping away the monarchy, attends subversive socialist meetings.

Moritz doesn't know what he thinks about the war, but he knows that his family is barely surviving on its rations and meager salaries. After Moritz takes a job as a journalist for the Berliner Daily, he find himself covering the injustices his mother protests against. And when he meets and falls in love with a Jewish girl who is also a passionate socialist, he begins to understand the movement toward a new democracy.

Review: World War I is one of my favorite periods in history, I loved learning about it in school, teaching about it as a World History teacher, and I like reading about it now through fiction. This book began slowly for me and I almost gave up around page 30, but by page 50 I was in for the duration.

Mortiz' family is the perfect mix of Germany in 1918. His mother and younger sister feel the war should end, that Germany cannot win and that the workers are baring the brunt of the injustices. His brother, the soldier, is badly wounded and blames the Jews and communists for Germany losing the war. He is addicted to morphine and is having trouble adjusting to being home. Moritz himself isn't sure where he stands. He sees how difficult life is for those around him, but he wants to support his King and country.

This novel does a very good job at showing the various issues and attitudes during the end of WWI in Germany through national events as well as those witnessed by Moritz. I did feel that the characters could have been more developed so that I cared for them a bit more. However, if anyone wants to get a good look at life in 1918, this is a good place to start.