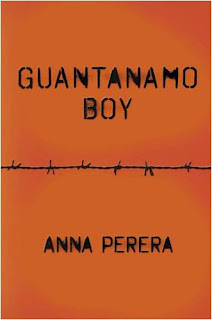 Genre: YAfiction
Pages: 340 (plus chronology and Afterward)
Rating: 5 out of 5

FTC Disclosure: I borrowed this from my school library

Summary (from the inside flap of the book): He's fifteen. He hasn't done anything wrong.It was supposed to be just a trip to vista his mum's family in Pakistan.But for Khalid Ahmed, it was the beginning of a living nightmare. He's kidnapped--then taken to a place thousands of miles from his home in the UK. A place where torture and terror are the daily routine. A place he may never be allowed to leave. A place called Guantano Bay.

Review: Not exactly a happy book, but this is so well done! It takes place in the years just after 9/11. The war in Afghanistan has started, but the war in Iraq has not.

Khalid is a likable character, a typical fifteen-year-old who is into playing football (soccer), hanging out with his friends, he is irritated by his parents and younger sisters, and he is into online video games. And, he doesn't want to go to Pakistan to visit relatives. While there the family hears rumors of men disappearing, of demonstrations, of shady dealings. One night Khalid is kidnapped and taken away for no apparent reason.

Khalid's experience in an American "enemy combatant" prison in Afghanistan and then in the famous Guantanamo Bay prison is horrific. The torture scenes are not pleasant and his spiral into temporary insanity is so well done. Reading this book made me angry all over again at the thought of how the US (and others, I know) treated prisoners, without regard for the Geneva Convention and other international (and human) rules of civility. I also understand that we were at war, which changes things. However, some of those prisoners were children as young as twelve years old.

This is an important story of family, human nature, forgiveness, friendship, and the human spirit.