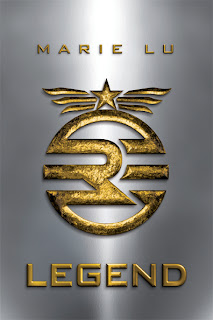 Author: Marie Lu
Genre: YA Dystopian fiction
Pages: 304
Rating: 4 out of 5
Challenges:
FTC Disclosure: I borrowed this from my school library
Summary (from Amazon): Once known as the western coast of the United States, the Republic is now a nation perpetually at war with hits neighbors, the Colonies. Born into an elite family in one of the Republic's wealthiest districts, fifteen-year-old June is a military prodigy. Obedient, passionate, and committed to her country, she is begin groomed for success in the Republic's highest circles.

Born into the slums of the Republic's Lake Sector, fifteen-year-old Day is the country's most wanted criminal. But his motives may not be as malicious as they seem. From very different worlds, June and Day have no reason to cross paths--until the day June's brother, Metias, is murdered, and Day becomes the prime suspect. Now, caught in the ultimate game of cat and mouse, Day is in a race for his family's survival, while June tries desperately to avenge Metias' death. But in a shocking turn of events, the two uncover the truth of what has really brought them together, and the sinister lengths to which their country will go to keep its secrets.

Review: I have heard such great reviews of this book so I was really excited to read it. However, it's taken me a week to read it and I don't know if that's because I wasn't liking the book or because I was just having a hectic week. Then I read one non-glowing review and I felt a little better, like maybe it isn't just me. Overall I enjoyed the book by the end and maybe that's because I actually had a long chunk of time to read today. I hadn't had that all week. 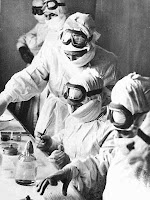 (A plague is important to this book)
Click to see my updated Google Map. Although this book takes place in post-apocolytic United States, the main location is Los Angeles, California.