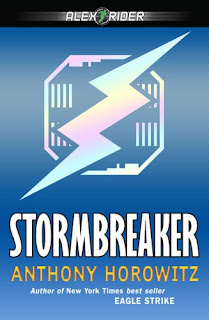 Author: Anthony Horowitz
Genre: YA fiction
Pages: 197
Rating: 4.5 out of 5
Challenges:
FTC Disclosure: My daughter received this book as a gift
Summary (from the inside flap of the book): They said his uncle died in a car accident. But Alex Rider knows that's a lie, and the bullet holes in the windshield prove it. Yet he never suspected the truth: his uncle was really a spy for Britain's top secret intelligence agency. And now Alex has been recruited to find his uncle's killers....

Review: I really enjoyed this "boy" book! My daughter received it for Christmas and was a bit hesitant, but we both dove in and got sucked into it right away!

Alex is fourteen and gets "recruited" into MI6 (the British equivalent of the CIA) and with only two weeks of training is off to get the bad guys. And boy are they bad. There's killing, sabotage, computer issues, and crazy stunts. Through it all Alex is strong and figures things out, sometimes by accident and sometimes on purpose.

What I liked is that Alex isn't perfect. He gets tired, he gets hurt, and he screws up. The story was fun and definitely pulled us along quickly so that we could find out what happened. The bad guys (and girl) were great as well, with enough evil and tech savvy to make us hate them.

The ending was a little too James Bond-ish for me, but I'll definitely read another in the series at some point.

Click to see my updated Google Map. My last book of 2011 and it's set in England! Now I want to see the Alex Rider movie!

I love this book too and I hope everyone who reads it has as much fun reading it as we did!