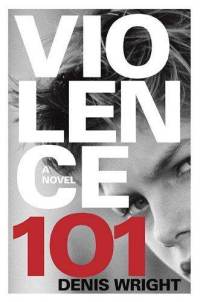 Author: Denis Wright
Genre: YA Fiction
Pages: 213
Rating: 4 out of 5
Challenges: PoC
FTC Disclosure: I borrowed this book from my school library
Summary (from the inside flap of the book): Hamish Graham is highly intelligent, disciplines, resourceful and fearless. Be he is also a fourteen-year-old with a serious anger problem and a disturbing past. He scorns al signs of weakness, and on his first day at New Horizons, his third institution for young offenders, he establishes his place at the top of the pecking order with a vicious attack on the largest boy in the group. Told in alternating perspectives, the book give a first-hand account of Hamish's world through his journal entries chronicling his past, and through the voices of the instructors and counselors who desperately struggle with how they can help a boy who cannot see beyond his violent worldview.

Review: Disturbed. That's how I feel, but not because of the violence in the book. Rather, I am disturbed because of the way the main character uses impressive logic to justify his violence. He shows no remorse, but truly feels that there is a justifiable reason for his anger and violence and he is very convincing. The author has an interesting forward in which he tells a bit about New Zealand history as well as his thoughts about violence and anger, including that he doesn't want the reader to label Hamish as a sociopath or psychopath.

Hamish is such an interesting character; he is intelligent, observant, logical, angry, obsessed with military leaders (in particular Alexander the Great), and violent. We get to know Hamish through his journal entries that he writes to the staff at the Boys Home. He is brutally honest about the things he has done, both violent and not, and why he did them. He also includes his insights about the other boys and the staff, which is how we get to know the other characters, all of whom are believable. I vacillated between sympathizing with the staff (I cannot imagine working at such a school) and being irritated with them for letting Hamish run the place. Some of the characters in this book are Maori and there is a lot of Maori vocabulary for which I used the glossary at the end of the book.

While the bulk of the story takes place in the boys home where Hamish has been put (his third, by the way) though the journals we travel to various locations in Hamish's life as he talks about his past and about military history that impresses him. The reader will learn a tremendous amount about history in fact. But, don't skim these parts because Hamish moves quickly between recounting a military offensive and explaining his own actions and justifications. I got a little tired of the military history myself, but when I realized there were nuggets of Hamish in the middle I kept on reading them (though I wanted to skim).

The final quarter of the book takes a turn when Hamish escapes from the boys' home. However, I am not going to recount any of that here as it would absolutely ruin the climax of the book. Suffice it to say the ending is the type I like: not too simple or obvious and there is no easy answer to the problems. 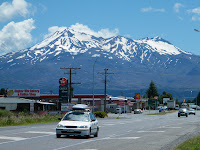 (Waiouru, the mountain that features large at the end of the book)

Click to see my updated Google Map. I didn't even realize that this book took place in New Zealand until I read the forward by the author in which he sets the scene, describing the way the New Zealand school system works, a bit of history about the Maori people and the settlement of New Zealand by the white Europeans. So, I feel like I got a bonus with this book: a good book and another location/culture!