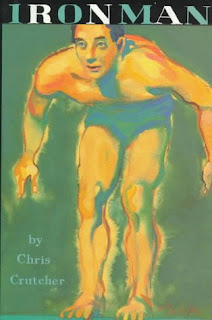 Author: Chris Crutcher
Genre: YA Fiction
Pages: 181
Rating: 5 out of 5
Challenges: Crutcher Challenge
FTC Disclosure: I borrowed this book from my school library
Summary (from the back of the book): Bo Brewster has been at war with his father for as long as he can remember. Following angry outbursts at his football coach and English teacher that have cost him his spot on the football team and moved him dangerously close to expulsion from school, he turns to the only adult he believes will listen. Larry King.

In his letters to Larry, Bo describes his quest for excellence on his own terms. No more coaches for me, he tells the talk show icon, no more dads. I'm going to be a triathlete, an Ironman. Relegated to Mr. Nak's before-school Anger Management group (which he initially believes to be populated with future serial killers and freeway snipers), Bo meets a hard-edged, down-on-their-luck pack of survivors with stainless steel shields against the world that Bo comes to see are not so different from his own. It is her he meets and falls in love with Shelly, a future American Gladiator, whose passion for physical challenge more than matches his.

Review: Chris Crutcher has done it again. He combines a sense of humor with horror and makes me want to read more. Bo is an angry teen whose dad is a total jerk, all they do is butt heads while Bo's dad uses denial to raise his son. Bo's reaction is to call his football coach an asshole, which lands him in this Anger Management group. This is a common theme for Crutcher who was a teacher and child/family therapist. My guess is that he was excellent at both.

All the characters except one in this book are male, making it one of those rare books geared toward teenage boys. There is also the sports element as Bo trains to participate in an Ironman (very long triathlon where he will swim, bike and run). However, the sports doesn't rule the book and is more of a vehicle for the character to let off steam, have some control of his life, and for the reader to learn more about the characters.

The issues that Crutcher raises in the anger management group are, unfortunately, typical family issues tied in with homophobia, racism, ignorance, and fear. When parents let their kids down and the kids need to be the grown ups, ugliness can take hold. These are the students in Bo's group and while they are angry, afraid, and yes, a little bit scary, Mr. Nak manages to get them to open up, admit things they are hiding, and come together for a common goal. This sounds sappy, but it isn't, not at all. It feels real and raw and that is the power of a Chris Crutcher novel.

(photo credit for the ironman image)

Click to see my updated Google Map. This book takes place in Washington state, a location for a number of my books this year, but this one is in eastern Washington. I've never been to that part of the state, but I hear it's beautiful.