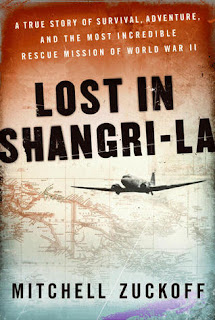 Author: Mitchell Zuckoff
Genre: Adult non-fiction
Pages: 400 (at least 80 of which are notes and index)
Rating: 4.5 out of 5
Challenges: PoC
FTC Disclosure: I bought this book on my iPad
Summary (from the inside flap of the book): On May 13, 1945, twenty-four officers and enlisted men and women stationed on what was then Dutch New Guinea boarded a transport planed named Gremlin Special for a sightseeing trip over "Shangri-La," a beautiful and mysterious valley surrounded by steep, jagged mountain peaks deep within the island's uncharted jungle.

But the pleasure tour became an unforgettable battle for survival when the plane crashed. Miraculously, three passengers survived--a WAC Corporal Margaret Hastings, Lieutenant John McCollom, and Sergeant Kenneth Decker. Emotionally devastated, badly injured, and vulnerable to disease, parasites, and poisonous snakes in the wet jungle climate, the trio was caught between man-eating headhunters and the enemy Japanese. With nothing to sustain them but a handful of candy and their own fortitude, they endured a harrowing trek down the mountainside--straight into a primitive tribe of superstitious natives who had never before seen a white man or woman.

Review: The description of this book was too good to pass up so I was really pleased when one of my book groups decided to read it this summer. Now I can't wait to discuss it with them in September!

Though the book started out a little slow for me with the detailed descriptions of each person on the plane and some of the other military personnel I thought it was a bit dry, but I figured they were all going to figure prominently in the book so I needed some background. Now that I've read the book I realize only a few are alive to be real "characters" in the book and learning about the others who die is important as an homage to them. There were a couple other chapters where I felt I was getting too much information (all the background on the film-maker for example), but that is a small complaint compared to how interesting I found the rest of the book.

Once I knew the characters and the flight took off from Hollandia, the US military base, I was totally sucked into this story. The idea that one of the three survivors was a woman made it all the more interesting because that poses additional issues such as their relationship, is she strong enough to continue with the men, her period, bathing, how the natives treated her, etc. And Zuckoff deals with all of that in a very satisfying way.

The story really is incredible and is one that makes the reader wonder how s/he would respond in a similar situation. Remember, it was 1945 and they were convinced the natives were cannibals and savages. I love that during their time in the jungle the survivors and their rescuers learned that the natives were humans just like them. The whole thing is a super fascinating cultural study!

Through the harrowing crash and time spent before the rescue (about two months) the fifteen military personnel managed to keep their spirits up, their health more or less in tact, and they were quite resourceful. The rescue itself was tense! I cannot imagine the bravery of the people on the ground as well as the flight crews who zoomed and glided in to get them. I also liked that the book included an epilogue so that we learn what happened to each of the "characters".

Overall I really enjoyed this well-researched book, I learned a lot, read a gripping tale, and was exposed to a new culture, are of the world, and an insight into the military in the Pacific theater of WWII, especially the Filipino troupes. I liked the inclusion of the photographs, but wish there had been a map.

(photo credit for the photo of the three plane crash survivors)

Click to see my updated Google Map. Did I ever think I'd read a book set in New Guinea? No I did not, but this was totally interesting and I feel like I got a real sense of the native people's culture by reading this. And I had to do a little research to find out about the geography because the left side of the island of New Guinea, where this story takes place now belongs to Indonesia (and has since 1962). The right side of the island is called Papua New Guinea.