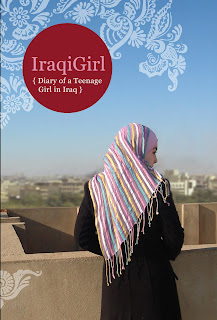 Title: IraqiGirl: Diary of a Teenage Girl in Iraq

Author: Edited by Elizabeth Wrigley-Field
Genre: Non-fiction
Pages: 205
Rating: 4 out of 5
Challenges: PoC
FTC Disclosure: I borrowed this book from my school library
Summary (from the back of the book): I"I feel that I have been sleeping all my life and I have woken up and opened my eyes to the world. A beautiful world! But impossible to love." These are the words of fifteen-year-old Hadiya, blogging from the city of Mosul, Iraq, to let the world know what life is really like as the military occupation of her country unfolds. I many ways, her life is familiar. She worries about exams and enjoys watching Friends during the rare hours the the electricity in her neighborhood is running.

But the horrors of war surround her everywhere--weeklong curfews, relatives killed, and friends whose families are forced to flee their homes. With black humor and unflinching honesty, Hadiya shares the painful stories of lives changed forever. "Let's go back," she writes, "to my un-normal life." With her intimate reflections on family, friendship, and community, IraqiGirl also allows us to witness the determination of one girl not only to survive, but to create, amidst the devastation of war, a future worth living for.

Review: Hadiya is no the author's real name. She has to use a fake name so that she and her family remain safe. Other Iraqi bloggers who commented on Saddam Hussein, the US soldiers, and the political situation were kidnapped and jailed.

Hadiya's blog posts are filled with angst about exams, talk of friends and family, and of the US occupation of Iraq. She does not hide her dislike for the Americans (making it clear that it is the government she dislikes, not the American people), for Saddam Hussein, or for the awful circumstances that she is in. After a couple years of US soldiers, she finds herself longing for life under Hussein (they had electricity all day).

I do wish there were some more comments by her readers in the book since we only see that a few times. She often responds to emails and comments she's had in her posts and I got a bit lost not knowing what she was referring to.

Hadiya gives us a rare look at life from the inside. As Americans (westerners) we mostly heard our news from the media and, I believe, didn't really hear all that was going on in Iraq over the past ten years. Through this book we read about the bombings, the killing by US soldiers, the lack of electricity and water, school closures, and other obstacles to a normal life. But we also read about family dynamics, blogging, TV, and friendships, all of which are just like ours. I think the most powerful aspect of this diary is that it shows how alike we all our. We have similar fears, desires, and thoughts even though we end up on the opposite side of war sometimes.

Here are three blogs that are mentioned in this book. Two of them are still blogging as of July 2011.

(photo credit for the photo of Mosul on the Tigris River)

Click to see my updated Google Map. I have been meaning to read this book for a while, especially since I haven't read a book based in Iraq this year. Last year I read Barefoot in Baghdad, which I really enjoyed.

Email ThisBlogThis!Share to TwitterShare to FacebookShare to Pinterest
Labels: 4 Stars, Non-Fiction, YA