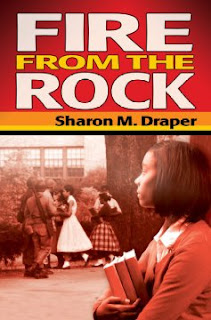 Title: Fire from the Rock

Author: Sharon M. Draper
Genre: YA historical fiction
Pages: 229
Rating: 4.5 out of 5
Challenges: PoC
FTC Disclosure: I borrowed this book from my school library
Summary (from the inside flap of the book): Sylvia Patterson looks forward to high school for all the normal reasons--being treated more like an adult, learning more about the wold, joining clubs, ands enjoying football games and dances. But in the year, 1957, and her town, Little Rock, things are anything but normal. To comply with federal law, the school board has decided to integrate Central High School, whether the governor of Arkansas or the citizens of Little Rock like it or not.

Sylvia is shocked when her teacher, Miss Washington, asks her to consider being one of the first black students to attend Central. It is an honor reserved for very few, but is is also a heavy burden that Sylvia may not be able to carry. She would be separated from lifelong friends (including a new boyfriend), excluded from social activities at school, and worse, subjected to threats and, possibly, violence. Sylvia is torn between wanting to bring about change and wanting to remain safe and happy in the life she has always known. Before Sylvia makes her final decision, smoldering racial tension in the town ignites into flame. When the smoke clears, she sees clearly that nothing is going to stop the change from coming. It is up to her generation to make it happen, in as many different ways as there are colors in the  world.

Review: This is a very good YA book that would make learning about this time in Arkansas (and US) history interesting to teens. The story flows, has characters that we like and care about, and makes the history come alive.

I cannot imagine what it was like to be African American in 1957, especially in a town like Little Rock where segregation was a way of life. I think it was wise of Draper to choose a student who was not part of the Little Rock Nine as her main character because then the reader doesn't feel as if the story has to follow history exactly. The parts involving the attempts at integration are spot on, but Sylvia's life can be fictional.

I liked Sylvia's character and her family. I also thought it was a nice twist to have her be friendly with a Jewish girl because she saw the hatred and bigotry aimed not only at blacks, but at Jews as well. Sylvia's family experiences hatred, racism, and violence, but manages to support one another and have a normal life at the same time. I think that's important to see.

I think students would be shocked to read about the fear and ignorance on the part of the Arkansas Governor others who opposed integration. To us it now seems so silly that students of all races wouldn't go to school together. I wonder if they could transfer the behavior of the past onto current-day issues of prejudice? 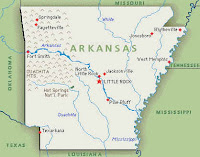 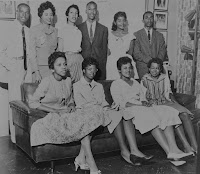 (photo credit for the photo of the Arkansas Nine)

Click to see my updated Google Map. Arkansas. I've never been there so don't really have much of an image. Honestly, the only photos I've send have been from when Bill Clinton was President and from the incidents covered in this book. I know that colors my impression of Arkansas and there is much to the state than that.