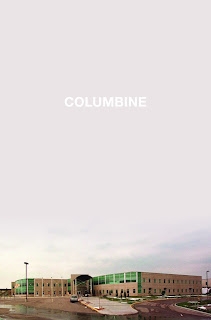 Author: Dave Cullen
Genre: Adult non-fiction
Pages: 380
Rating: 4.5 out of 5
Challenges: Reading from my shelves
FTC Disclosure: I received this book as a gift
Summary (from the back of the book): On April 20, 1999, two boys went to their high school with bombs and guns. Their goal was to leave a "lasting impression on the world." The horror they inflicted left an indelible stamp on the American Psyche.

Now in this definitive account Dave Cullen presents a compelling and utterly human profile of human killers. With a keen sense of investigative eye and psychological acumen, he draws on hundreds of interviews, thousands of pages of police files, FBI psychologists, and the boys' tapes and diaries. This close-up portrait of violence, a community render helpless, and police blunders and cover-ups is an unforgettable cautionary tale for our time.

Review: Columbine. Unfortunately, that name conjures up unpleasant thoughts and memories for most adults in America. For me it was all too real as I was a high school teacher when it happened (and still am). I remember the shock, the sadness, the feeling that it couldn't be real, and that I had no idea how all those families were feeling.

One year after the event I think most high schools were afraid of an anniversary event somewhere else. We had undercover police on our campus (and it was not subtle: people the students had never seen before "casually" hanging out around campus with empty backpacks) and about 80% of our students stayed away from school that day, most of them using it as an excuse to go to the beach. That was one of my best days of teaching. The rumors were that the Erik and Dylan, the boys who killed thirteen in Columbine, were goths, outsiders, and loners. So guess who came to school on that anniversary? The 20% of our students who fit those categories. We all had a wonderful time in class (I think I had about 4 students each period) with students participating who didn't normally do so. At lunch all the staff and students shared ice cream in the quad. There was a sense of belonging and safety for those in attendance and every student I taught that day said it was a great day since all "those students" weren't there; they felt safe on campus, no one teased or harassed them, and they wished every day could be this way.

I tell this story to show the lasting impact of the Columbine events. Erik and Dylan didn't just kill thirteen people that day. Their actions and those of the media, police, and public drastically altered lives across the country. Cullen does a wonderful job of showing the role of the media and police during and after the event in perpetuating false information about what was happening in the school and, afterward, who committed the crimes. Kids who were loners were labeled for a very long time. Erik and Dylan were anything but loners. They were popular, smart, dated, and had friends.

Two years ago we had our own six-hour lockdown when someone saw a student run onto our campus with a gun (turned out they didn't). Since I am the Teacher Librarian I had 100 students in my charge that day, locked in a windowless textbook room. The students with me talked about Columbine and how the library was one of the worst places hit (it turns out we had the perpetrates in the textbook room with us. They had a knife, but no gun and they didn't hurt anyone. But let me tell you, having SWAT team members point guns at my students while they walked out with their hands on their heads is something I will never forget). I noticed that at Columbine, there was no mention of any library staff. I wonder if the author just didn't mention them or if there really was no adult staff in the library that could have helped those students.

As an adult, when I live during an event like Columbine and read the papers, watch the news, etc I feel as if I know what happened. At some level I've got to trust the media and the police and all other reports that come out. It's the way I understand what's going on. Cullen shows us in this book that false information was fed to the media, the media reported badly and perpetuated rumors, survivors' stories were false or confused, and families' interviews and books gave their skewed accounts. We're only human and Cullen's book shows this to its readers.

I was afraid this book would be too depressing for me to read, but it isn't. It is a striking portrait of two American teenagers, their families, friends, classmates, and a system that just didn't pay enough attention. For me, the police cover ups and mistakes are the saddest part and they show what we all know, that if someone out there had paid a little more attention, perhaps things would have been different. As an educator I can always second guess myself when one of our students does something scary or wrong.

If you have any interest in this topic, this is the book to read. I had planned on reading 100 pages a week for three weeks and instead read it in one day! Cullen doesn't sensationalize the events or the people, he didn't publish photos of the event (such a smart idea), and he spent ten years reading, talking and researching this very well done book. 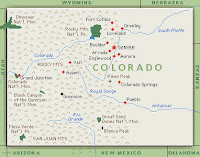 (photo credit for the high school photo on the right)

Click to see my updated Google Map. With this book I am adding a new state, Colorado, to my "Where Am I Reading" challenge. I thought at first that the state setting for this book didn't really matter, but it did. Colorado is a state where hunting is in the culture as is Evangelical Christianity, both of which play a role in this story.