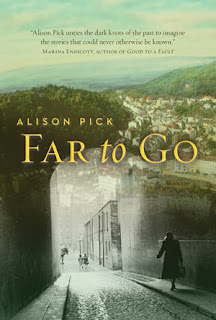 Title: Far to Go
Author: Alison Pick
Genre: Adult fiction
Pages: 320
Rating: 4 out of 5
Challenges:
FTC Disclosure: I bought this book on my iPad
Summary (from Amazon): Although set in the months leading up to Hitler's invasion of Czechoslovakia, Alison Pick's second novel does not wrestle with sweeping ideological conceits about the nature of evil or the burden of memory. The Holocaust is faintly alluded to in the novel by hushed voices on the radio or a body found in the street, but it is a never a fully realized presence. The story focuses on the Bauers, a secular Jewish Czech family, as they cope with the twin struggles of an increasingly anti-Semitic cultural climate and a strained marriage. Marta, the Bauers' nanny, is the novel's eyes and ears, and also its heart.


Review: I love reading World War II books and books set in the Holocaust in particular, so really looked forward to reading this book. However, it didn't totally live up to my expectations. I wanted to be pulled in and truly feel for the characters and I didn't. Don't get me wrong, I liked the book, but I didn't love it.

One thing I did really enjoy is the setting of Czechoslovakia, specifically the Sudentenland, which Hitler took over in 1939. I have never read a WWII book set in that country before and I think the author did a great job of showing how easily the Germans took over, how the population was convinced it would all be okay, how many non-Jews were convinced it was the right thing, etc. The Bauers are sure that if they move to Prague, out of the Germany part of Czechoslovakia, that they will be alright. Surely Hitler cannot take over Prague! I am sure that millions felt this way at the time.

As a gentile working for a Jewish family Marta was in a unique position. She was free to leave, to walk the streets, own a business, and more. However, she was naive and so badly wanted to fit into the Bauer family that she stayed with them throughout their ordeal, taking care of their son Pepik as if he was her own. Another great aspect of this book (though one that could have been expanded) is getting Pepik on the kindertransport from Prague to Scotland. I cannot imagine sending my 6-ear-old off on a train full of children, hoping they got to their destination. So many never heard from their children again.

The part that didn't work for me in this book was the unknown narrator that popped up occasionally. She obviously lived in the present time and was connected to the Bauers and/or Marta in some way, but I found that confusing. There was no indication that the book was switching time or narrator and the writing in that part was vague (intensionally, I am sure) and unclear. At the end it all came together, but I felt like it took away from the other part of the story.

If you like WWII and Holocaust books I definitely recommend this one. What I think I liked most is that it is a look at a different place and aspect of WWII and doesn't do the standard "camp" story line. 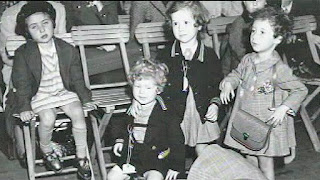 (photo credit for right photo)
Click to see my updated Google Map. A book set in a new country: Czechoslovakia! I have done many posts that listed good Holocaust and WWII books so I won't re-list all of them here. Here are a couple that I've read in the last few weeks that I really liked:

Aww... I'm sorry it didn't live up to your expectations. I shouldn't have hyped it up. :)

But I get the narrator thing, because I found it jarring and as I was mentally "reviewing" the book while reading, I did assume, that would be a major negative point mentioned in my review. I guess it didn't eventually because I altered my reading approach for those chapters alone (being not a fan of 2nd person writing).

But still, I'm glad you gave this a try!

Aths--Not only did I give it a try, but I liked it. Just didn't love it. Hey, it's personal history and WWII, which is always good in my book.

An unknown narrator who pops up sporadically might not work for me, either. Thanks for you honest review. Did you like reading this on your iPad?

Suko--Other than the unknown narrator, I did enjoy this book. Maybe knowing that would make those sections easier to read

Thanks for an honest review. I don't love reading about WWII so knowing that you didn't love this book is enough for me. I do enjoy torturing (wink wink) myself with sad/tragic family drama but will pass on this book.

Mari--Definitely don't read this one if WWII isn't your thing. Yes, what is it about tragic family drama that pulls us in? :-)