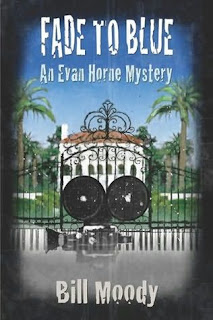 Title: Fade to Blue
Author: Bill Moody
Genre: Adult mystery
Pages: 286
Rating: 4 out of 5
Challenges: Mystery and Suspense;
FTC Disclosure: I borrowed this book from my school library
Summary (from the inside flap of the book): Jazz pianist Evan Horne, settled into the San Francisco jazz scene, takes a gig in Los Angeles, where he's offered his most unusual job yet. Mega movie star Ryan Stiles hires Evan to teach him to look like he's playing the piano for an upcoming film role. Evan stays at Stiles' lush Malibu home for the tutoring, but suddenly things go wrong with the arrogant, spoiled star. Stiles' adversarial relationship with the paparazzi explodes when a photographer is killed. Was it an accident or is Stiles himself a suspect? Evan wants out, but Stiles' manager dangles the opportunity for Evan to score the film if he stays. Stiles is cleared but when the film begins, another mysterious death occurs, and somebody is blackmailing the star. With help from his FBI girlfriend, Andie Lawrence, and Lt. Danny Cooper, Evan launches his own investigation to help clear Stiles. To further complicate things, Evan's old nemesis, serial killer Gillian Sims escapes from prison.


Review: Finally, a good old fashioned mystery! It's been so long since I read a mystery that fits the "detective" version and I am glad that I did. This book was the right one at the right moment. This isn't a deep book, but rather a fun story about stereotypical Hollywood actors and the world they live in.

I liked the characters though I didn't feel like I really got to know them in any deep sense, but perhaps this is because this isn't the first of the Evan Horne novels. I wish I had read the one that came before this one since there was a storyline (the serial killer) that obviously had been well told in a previous book.

I didn't completely figure out the mystery before it was revealed, which is always a good thing in my view. If you are in the mood for a light mystery that will grab your attention, then this is a good one. 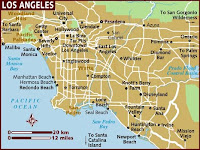 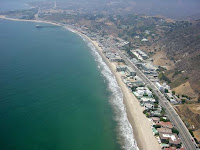 (photo credit)
Click to see my updated Google Map. Another book set in Los Angeles, but this one centered in Malibu, which makes sense since the supporting characters were Hollywood-related and so many of them live in the Malibu area.

This sounds fun and light for a light Sunday reading. I'm not too into mysteries, but I like to read the odd one once in a while.

Could it be considered a "cozy mystery"?

I love the sound of this. I'm a bit of a mystery buff, and anything with music as a plot point always draws me in. :)

Thanks for your review!

Aths--When you get in the mood for a light mystery, this one is available from NetGalley

Alexandra--I don't know what a "cozy mystery" is...

Stephanie--You're welcome, this really is a Hollywood story with a mystery thrown in