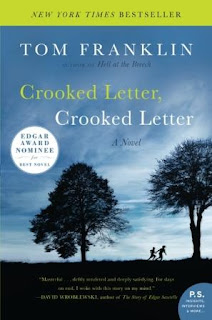 Title: Crooked Letter, Crooked Letter
Author: Tom Franklin
Genre: Adult mystery
Pages: 272
Rating: 4 out of 5
Challenges: Reading from my shelves, Mystery and Suspense, TLC Book Tour
FTC Disclosure: I bought this book
Summary (from the inside flap of the book): In the late 1970s, Larry Ott and Silas "32" Jones were boyhood pals. Their worlds were as different as night and day: Larry, the child of lower-middle-class white parents, and Silas, the son of a poor, single black mother. Yet for a few months the boys stepped outside of their circumstances and shared a special bond. But then tragedy struck: Larry took a girl on a date to a drive-in movie, and she was never heard from again. She was never found and Larry never confessed, but all eyes rested on him as the culprit. The incident shook the county--and perhaps Silas most of all. His friendship with Larry was broken, and then Silas left town.

More than twenty years have passed. Larry, a mechanic, lives a solitary existence, never able to rise above the whispers of suspicion. Silas has returned as a constable. He and Larry have no reason to cross paths until another girl disappears and Larry is blamed again. And now the two men who once called each other friend are forced to confront the past they've buried and ignored for decades.

Review: I love a good mystery so was really pleased when Trish of TLC Tours suggested this one to me. I also liked the idea of reading a book set in Mississippi. I really liked the beginning of the book, got a bit annoyed in the middle and then really liked the ending. But, now that I've finished the book I like the middle better because I understand it. Does that make sense?

I realize that while I saw this as a mystery, which it is, it is also a character study. Both Larry and Silas are people that that the reader needs to get to know and the mystery is simply the background vehicle on which they ride. Yes there are multiple mysteries going on (disappearances, people getting shot, etc), but it is the interactions between these two main characters that are most important.

Larry has had a very tough life: abuse at the hands of his father; falsely accused of murder; ostracized by the town; a failing business and more. However, Larry doesn't really seem to fight for himself, perhaps he is too beaten down by the low expectations thrust upon him from an early age. What he wants is friendship, but what he gets is a Book of the Month Club.

Silas has worked hard his whole life to overcome poverty and race (remember, this is the rural deep south in the 1960s and '70s) and he is carrying a heavy burden (which I can't reveal). Now in a position of authority in town he feels like he has made it, but life and Larry keep getting in the way.

I really liked the reality of the friendship between these two men. They came from different circles, but are so similar that they are drawn to one another. They share a past and recently I've been thinking about how important that is in our relationships. If you'd like a read that has some mystery and good character study, than this is the one for you. 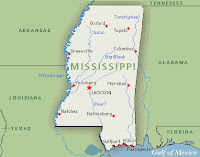 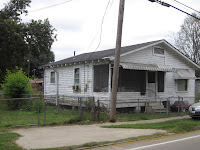 (photo credit for right photo)
Click to see my updated Google Map. This is my first book this year that is set in Mississippi! Life in Mississippi is just so very different from my own, especially when the setting is the 1960s. Growing up in southern California, the deep south seems very foreign to me.

This has been on my radar for awhile now. I have heard so many great things about this book and I love to read books set in the South. Thanks for the great review and giveaway.

What a coincidence! I just picked this audio cd yesterday! But like you, I assumed it was more a mystery than a character-focused study. I usually don't do character-oriented books on audio - it makes for hard listening, so I'm rethinking that I should pick this on print.

I loved the depth of this book. It was so much more than just a mystery.

Lola--It was so much more than a mystery!

Great review, I totally got the beginning, middle, end, it all coming together and enjoying it more, I am intrigued more now.

Thanks for the opportunity to win.

I generally avoid books set in the South because it's not escapism to read about the place you live (I'm in Mississippi) but I'm very curious about this one. Incidentally, it was quite a culture shock moving here. My family moved to Mississippi from Oklahoma and I can honestly say it took years for me to adjust, then I kept convincing myself I didn't have to make myself at home because we weren't going to stay . . . and here we are, 25 years later and it's home, now. I just wish it didn't have so much poison ivy.

Marce--Good luck in the drawing for this book. It truly is an intriguing one!

Bookfool--Mississippi...that must have been quite a move and how funny that you are still there after 25 years! We just never know where life will take us. Poison ivy... we have poison oak, which I think is similar in its ickyness

This looks really interesting. I have just got back into reading some crime after being fed up with it for a while, I love getting tips about crime stories that are a bit different.

Mostraum--I do love a good mystery/crime book. Good luck in the give away!

I enjoy mysteries, too, and I'm always looking for good, unusual, creative ones. One of the things I like about this book and which intrigues me is the friendship between the two men at the crux of the novel. So many of the books I read are about female relationships or men & women. You mentioned you liked the reality of the men's friendship and that excited me because I enjoy characters who are well-developed and real. It's interesting that these men have very different backgrounds yet are similar in many ways and therefore drawn to each other. I'm interested to read about their friendship and its relation to the mysteries in the story.
Thank you for a great review and for the giveaway. I'm listing this book on my tbr list!

Amy--I think the author did really well with the friendship/relationship of the two main characters, both when they were young and later when they were adults. It cannot have been easy to have an inter-racial friendship in 1960s Mississippi though I am sure it did happen.

It's funny, but sometimes when I finish a book like this I immediately want to reread it because it's only at the end that I feel like I understand everything, which makes me want to read it all again with that understanding in mind. (Does that make sense?!)

I'm glad you enjoyed it in the end. Thanks for being on the tour.!

Heather--Such an interesting thought to re-read a book now that one knows what's going on! Thank you so much for hosting the TLC tours, they're great

I couldn't agree with you more, the charactesr were front and center in this book, the mystery was the background. I loved both elements but it was a joy to read about these two men and how their lifes how traveled seperate but pretty similar paths as far as emotionally. Great review.

Ryan--Thanks for visiting! The author really did an outstanding job on the men, I agree