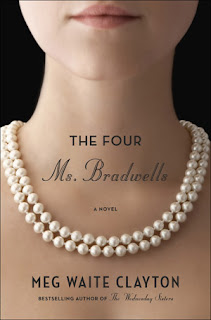 Title: The Four Ms. Bradwells
Author: Meg Waite Clayton
Genre: Adult fiction
Pages: 320
Rating: 4.5 out of 5
Challenges:
FTC Disclosure: I received this book from the publisher for review
Summary (from the inside flap of the book): Mia, Laney, Betts, and Ginger, best friends since law school, have reunited for a long weekend as Betts awaits Senate confirmation of her appointment to the Supreme Court. Nicknamed "the Ms. Bradwells" during their first class at the University of Michigan Law School in 1979--when only three women had ever served full Senate terms and none had been appointed to the Court--the four have supported one another through life's challenges: marriages and divorces, births and deaths, career setbacks and triumphs large and small. Betts was, and still is, the Funny One. Ginger, the Rebel. Laney, the Good Girl. And Mia, the Sevant.

But when the Senate hearings uncover a deeply buried skeleton in the friends' collective closet, the Ms. Bradwells retreat to a summer house on the Chesapeake Bay, where they find themselves reliving a much darker period in their past--one that stirs up secrets they've kept for, and from, one another, and could change their lives forever.


Review: I read about this book on Reading on a Rainy Day and Aths raved about the book. Then received an email from the publisher asking if I was interested in reviewing the book. Yes! While Aths was hesitant to read this book I knew that I would like it from the start. I do enjoy books about women and their friendships with one another, but I also find that a lot of books make the friendships either too perfect or too tumultuous. In real life friendships are more like the ones in this book: we are each other's closest allies, but we do keep secrets and we are jealous of one another, and we do sabotage each other.

All four women excelled at Michigan Law School yet they took divergent paths after graduation, which is really authentic; so many "lawyers" aren't really lawyers in the long run. I felt this way about the entire book: it is real and believable, with conversations and situations that I could relate to.

I liked all four of the women, but Ginger was my least favorite. She was just too self-centered, which I realize comes from insecurity, but it made her more unlikable. Mia was my favorite (could it be because she is the photographer of the group?). While they are all smart, she seems to also be the most intuitive and rational. I loved the relationship between the women. They all admitted that they were really two sets of two, but they each provided something for everyone in the group. And, like real friends, they keep some things to themselves even if they should share and get support from one another. They have jealousies, anger, love, and worries that really resonated with me.

I also liked that this book is so current (the Obamas are mentioned as the current first family). I liked that political issues (mostly women's issues) were at the fore front of their history and their lives, that the women are struggling both personally and professionally with women's place in politics, social settings, and in the work place. 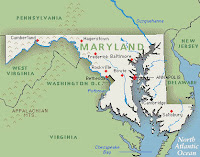 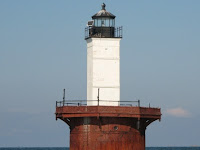 (photo credit for lighthouse)
Click to see my updated Google Map. This book takes place in Maryland, mostly on a tiny island out in the Chesapeake Bay. I have been to Maryland (both Baltimore and Annapolis), but not to any of the islands. However, I did spend a few weeks one summer on a tiny island in Puget Sound and I think there is a culture on a small island of isolation, privilege, and secrecy, all of which fit this book. I chose the photograph of the lighthouse since that plays a significant role in this book.

I did enjoy the relationship of the women, but the plot was predictible and although I loved the setting, it stole the show as far as I'm concerned. I wanted a bit more of their lives before school. I'd still read another book by her though.

Ti--I thought I knew what was coming, but didn't get it all right. I do think she is a good writer

Yay!! I'm glad you liked this! I loved how the friendships were shown so authentically! Ginger was my least favorite too. Some of her actions just put me off. I started with Mia as my favorite and then Betts tied with her.

Aths--I think the authentic friendships was the best part of this book.

I'm so glad you enjoyed this book. I also liked it, Meg's a good writer!

I'm glad to see that you liked this one so much. I'm trying to finish reading it for book club this week and finding that it's slow going.

Mari--This is the first of her books that I've written, but I am open to her other one since I liked this book

Alyce--I didn't feel it was slow, but I hope you finish it for your book club