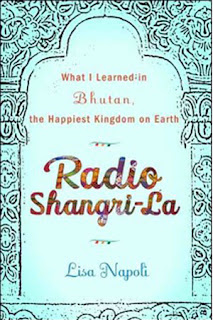 Title: Radio Shangri-La: What I learned in Bhutan, the Happiest Kingdom on Earth
Author: Lisa Napoli
Genre: Adult, Non-fiction, memoir
Pages: 277
Rating: 4.5 out of 5
Challenges: PoC
FTC Disclosure: I bought this book with my own money
Summary (from the inside flap of the book): Lisa Napoli was in the grip of a crisis, dissatisfied with her life and her work as a radio journalist. When a chance encounter with a handsome stranger presented her with an opportunity to move halfway around the world, Lisa left behind cosmopolitan Los ANgeles for a new adventure int eh ancient Himalayan kingdom of Bhutan--said to be one of the happiest places on earth.

Long isolated from industrialization and just beginning to open its doors to the modern world, Bhutan  is a deeply spiritual place, devoted to environmental conservation and committed to the happiness of its people--in fact, Bhutan measures its success in Gross National Happiness rather than in GNP. In a country without a single traffic light, its citizens are believed to be among the most content in the world. To Lisa, it seemed to be a place that offered the opposite of her fast-paced existence in the United States, where the noisy din of sound-bite news and cell phones dominates our days and meaningful conversation is a rare commodity; where everyone is plugged in digitally, yet rarely connects with the people around them.

Thousands of miles away from everything and everyone she knows, Lisa creates a new community for herself. As she helps to start Bhutan's first youth-oriented radio state, Kuzoo FM, she must come to terms with her conflicting feelings about the impact of the medium on a country that had been shielded from its effects. Immersing herself in Bhutan;s rapidly changing culture, Lisa realizes that her own perspective on life is changing as well--and that she is discovering the sense of purpose and joy that she has been yearning for.


Review: I first read about this book on The Zen Leaf (thank you Amanda) and then on Reading on a Rainy Day (Aths, of course). Both thought it was interesting so I went for it and am glad that I did. The summary from the book really says a lot about the content of the book so I won't rehash it here in my review section, but here's what I liked about the book: 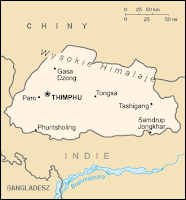 Click to see my updated Google Map. Bhutan. Most people probably have no idea where it is located, let alone anything about it. I did know where it was, but had no idea what an interesting place it is (and is becoming). A family friend traveled there in the past couple years and now I want to sit with him and ask tons of questions about his trip to see how his impressions fit with Lisa Napoli's.

Email ThisBlogThis!Share to TwitterShare to FacebookShare to Pinterest
Labels: 4.5 Stars, About Me, Non-Fiction, POC

Glad to hear you liked it!

I heard the author speak about this book last week at the Tucson Festival of Books, and she read an amusing excerpt about the symbols that are painted on the houses. I like memoirs for the same reasons you listed.

I'm waiting for my turn at this one from our library! Glad you liked it!

Amanda and Aths--Thank you so much for the recommendations!

Alyce--How great to hear her speak. I just found out she is good friends with a friend of mine. So that's 2 degrees of separation (not that it gets me anything, but it's cool)

Col--I think you'll enjoy it; it's a fun read

I love the format of this review, and glad you liked it. All of the reasons you listed make me think I'll like the book a lot.

Kim--Thank you so much! I keep thinking about this book days later, which I figure is a good sign