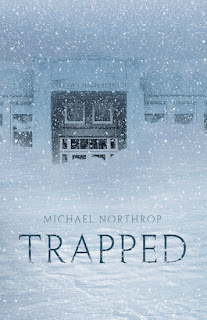 Title: Trapped
Author: Michael Northrop
Genre: YA fiction
Pages: 242
Rating: 4.5 out of 5
Challenges:
FTC Disclosure: I borrowed this from my school library
Summary (from the inside flap of the book): The day the blizzard started, no one knew that it was going to keep snowing for a wee. That for those in its path, it would become not just a matter of keeping warm, but of staying alive. Scotty and his friends Pete and Jason are among the last seven kids at their high school waiting to get picked up that day, and they soon realize that no one is coming for them. Still, it doesn't seem so bad to spend the night at school, especially when distractingly hot Krista and Julie are sleeping just down the hall. But then the power goes out, then the heat. The pipes freeze, and the roof shudders. As the days add up, the snow piles higher, and the empty halls grow colder and darker, the mounting pressure forces a devastating decision....

Review: I read Michael Northrop's Gentlemen and enjoyed it so was pleased to see he had a second book. And, 7 teenagers trapped in a high school? Great premise. I read this book in one day (yes, partly at work) while it POURED rain outside and I was cold so I felt like I was living a tiny piece of the story.

One of the things I like about this book is that while the characters are male and female, it's a boy narrating the story so we get a guy's perspective. I feel like there are few books out there for guys that aren't fantasy and science fiction. So, YA fiction for boys, it's all good.

I like the way Northrop has characters that are "normal" as well. Yes, there is a jock, an outsider, and a bully, but in the long run they are just guys who aren't on the extreme ends of anything and that means that more readers will relate to them and find them very believable. There is also a little romance, but not the ushy-gushy kind, it's more the "I wonder if she likes me, but I am not sure I have the guts to do anything about it" kind.

Northrop definitely built tension in this story; I was never sure who was going to survive, would they be discovered, would they freeze... and I am not going to reveal any of that here, either. This could have been a boring book: seven people trapped in a high school, but it isn't at all. There is tension, action (both on the part of nature and the trapped students), introspection, and there are even some funny moments. The students are resourceful, but not superhero-like. This is realistic fiction that captured my heart. 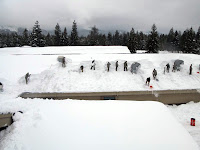 I went to college in Connecticut--Connecticut College (go Camels!)--so it was fun to read a book set there. I don't think I've ever read a book set in Connecticut before. We had snow in New London, CT, but since it's coastal we never had anything like what they experienced in this book. Thank goodness since that would have been WAY too much for a southern California girl like me. Click to see my updated Google Map.

It seems a bit weird, but this used to be one of my dreams when I was younger. I used to wish that we'd all get trapped in school and have to spend the night there. I think I'll have to keep an eye out for this book, just for sentimental reasons ;-)

Farmlane--I think we've all sort of fantasized about spending a overnight in our school. My version had a much better outcome!

This book sounds wonderful! The premise is certainly intriguing, and I'm really curious to know what happens.

Aths--It's funny that a book with 7 people trapped in a building can be interesting, I mean, really, how much can happen, but Northrop does a great job of making it interesting