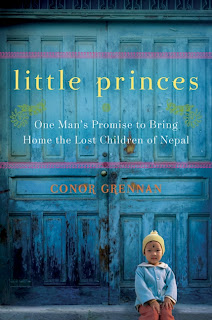 Title: Little Princes
Author: Conor Grennan
Genre: Non-fiction
Pages: 294
Rating: 5 out of 5
Challenges: PoC; Reading from my Shelves
FTC Disclosure: I bought this with my own money
Summary (from the inside flap of the book): In search of adventure, twenty-nine-year-old Conor Grennan traded his day job for a year-long trip around the globe, a journey that began with a three-month stint volunteering at the Little Princes Children's Home, an orphanage in war-torn Nepal. Conor was initially reluctant to volunteer, unsure whether he had the proper skill, or enough passion, to get involved in a developing country in the middle of a civil war. But he was soon overcome by the herd of rambunctious, resilient children who would challenge and reward him in a way that he had never imagined. When Conor learned the unthinkable truth about their situation, he was stunned. The children were not orphans at all. Child traffickers were promising families in remote villages to protect their children from the civil war--for a huge fee--by taking them to safety. They would then abandon the children far from home, in the chaos of Nepal's capital, Kathmandu.

For Conor, what began as a footloose adventure becomes a commitment to reunite the children he had grown to love with their families, but this would be no small task. He would risk his life on a journey through the legendary mountains of Nepal, facing the dangers of a bloody civil war and a debilitating injury. Waiting for Conor back in Kathmandu, and hopeful he would make it out before being trapped in by snow, was the woman who would eventually become his wife and share his life's work.

Review: O.M.G. I LOVED this book! This book ranks up there (and perhaps beyond) Monique and the Mango Rains by Kris Holloway. This sort of book is right up my alley: non-fiction; caring people making a difference; and issues of injustice. But this book goes one step farther and is told like a story rather than a dry non-fiction. Grennan has a great sense of humor that makes the reader laugh in amongst the crying, and yes, I cried. Maybe that's because I am a mom and cannot imagine my child being taken away from me at the age of 5 and not seeing her again. I'll confess that I cry at the good parts of a book so that will show you that this book is also full of hope.

When I was brainstorming concepts that this book deals with the ones that came to mind were poverty, lack of education, and trafficking. The traffickers in Nepal are very smart; they went to the most rural villages high in the mountains and promised to take children and give them a better life. They promised security in the face of Maoist attacks, education when there was none available in the villages, and food when a drought had hit the region. Instead they abandoned the children in Kathmandu or sold them into slavery. And the best part? Families paid for this service! Preying on the poor and illiterate is just about as low as it gets.

Conor Grennen and his colleagues at Next Generation Nepal now work to reunite these children with their parents back in their home villages. Conor tells a good story; he builds tension, breaks it with appropriate humor and lighter moments, and doesn't paint himself and his colleagues as heros. They are people who found themselves enamoured with Nepalese children and a will to help. They took it one step at a time, dealing with obstacles along the way, but perservering because they truley believe in what they are doing.

I think what I like about books like this one is that they are real people making a difference, telling a good story, and giving the reader hope that small efforts make a big impact.

I've never been to Nepal and didn't really have a desire to go, but this book made me much more interested. Two friends of mine volunteered in Nepal as an English teacher for 4 months years ago and I loved hearing their stories. Sadly, I don't have any other Nepal books to recommend. Click to see my updated Google Map.

Yikes! You finished it before me! I should stop reading this at work and read it at home. I'm barely getting any reading time at work now!

The best thing I love about this book is the humor. You so want to read it!

I just finished this a couple of days ago and love it too! Have you read Three Cups of Tea? This book reminds me of it, but written in an easier-to-read style.

Haven't done my review yet, will do so this weekend!

Ahs--definitely bring the book home so you can read it more! It just gets better and better as it progresses

Christa--So glad to hear you loved it too! I have read Three Cups of Tea. I liked that one, but liked Mortenson's Stones into Schools better.

What a thoughtful review, Helen. This one's a new one to me, but several of my friends are doing research in Nepal at the moment, so it's an area that interests me. Thanks for the heads up!

Stephanie--Thank you. I loved this book and if you've got friends in Nepal right now, I'd recommend the book highly

This sounds wonderful and like the all round package