Title: Girls of Riyadh
Author: Rajaa Alsanea
Genre: Fiction, romance
Pages: 280
Rating: 4 out of 5
Challenges: PoC; Middle East, Read from my Shelves
FTC Disclosure: I bought this with my own money
Summary (from the back of the book): Released in 2005 in Arabic, Girls of Riyadh caused a sensation throughout the Arab world. Now in English, Rajaa Alsanea's bold first novel exposes the hidden lives of young upper-class women and their personal conflicts with cultural tradition and offers Westerners an unprecedented glimpse into a society often veiled from view.

From the Saudi singles scene in Riyadh to their travels outside the country, four young women, Gamrah, Michelle, Sadeem, and Lamees, literally and figuratively shed traditional garb as they negotiate their love lives; their professional successes; their rebellions, large and small; and ultimately their place--somewhere in between contemporary Western society and their Islamic home.

Review: This book is billed as Sex and the Arabian City and that's definitely what it is. It's written in an interesting format: the narrator has formed a Yahoo! group and posts a once-a-week email to the group describing the exploits, love lives, gossip, trials and tribulations of four friends over 6 years. Each week the email is introduced with a paragraph responding to anonymous email receivers and the comments they've made (that the reader never sees).

This book was banned in Saudi Arabia and I can see why. In a society such as Saudi Arabia that likes to have close control of its population, this book would be "too much". It covers arranged marriages, divorce (the woman receives papers telling her she is divorced with no warning), affairs, dating behind the families' backs and against their wishes, and more. None of it is too racy by western standards, but it does make the Saudi men seem not so great.

One of my favorite parts was the last page where the author explains the meaning of the names she gave to the men (bonehead, wellborn, etc)! This book is fun, but, like TV shows that cover the same topic, I was done with it about 50 pages before it ended. Actually, that's not totally true, I did want to know how it all ended up. 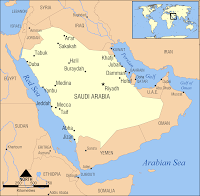 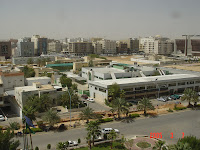 Saudi Arabia is somewhere I'd like to visit and I don't want to visit. I'd love to see Mecca and the holy sites, but I wouldn't want to deal with the strictness. Click to see my updated Google Map.

My! I'm sure this is a serious book, but I feel it sounds delightful as well! I have a lot of friends in Saudi and even though I haven't been there, I feel almost as if I have.

Aths--This isn't very serious at all, but it covers issues that are. It's definitely a romp to read it. I'd be interested to see what you think of it since you have friends there

I am an author, and a lot of people have compared my debut novel (The Arab Season) to Girls of Riyadh. I have receantly read the book and I am very happy w that comparison. I really enjoyed reading and I hope my new readers will equally enjoy my efforts.

Arab Season--I hope you are getting a good response to your novel. I'll go look into it now