This meme is hosted by Alyce from At Home With Books
To participate in Saturday Snapshot meme post a photo that you (or a friend or family member) have taken. Photos can be old or new, and can be of any subject as long as they are clean and appropriate for all eyes to see. How much detail you give in the caption is entirely up to you. All Alyce asks is that you don't post random photos that you find online. 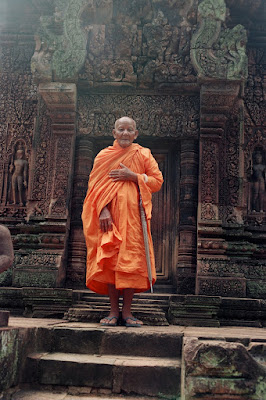 This is one of my favorite photos that I have ever taken! I took it in Cambodia in 1997 when I visited my brother and sister-in-law who were working there. We went up to Seam Reap to see Ankgor Wat and the other temples; it's one of the most amazing places I've ever been. The Khmer Rouge was still lurking in the jungles in that area so when we decided to go see the outlying temple of Banteay Serai the police warned us that we could either hire a driver and a soldier who would carry an AK47 to protect us or we could hire a driver and pay a bribe at the kiosk we'd encounter along the way. The man at the kiosk would share our bribe with the rebels and, hopefully, they'd leave us alone. We chose the latter and the temple was absolutely worth the risk. This monk, one of only 7 who survived the Khmer Rouge attacks in the 1970s, happened to be there.
It was an exciting time in Cambodia as every day there was news that Pol Pot had been sited in the jungles and then caught (he was put on trial a month later and sentenced to house arrest). 2 days after I left there was a coup, trapping my family in their apartment for 3 days with tanks and soldiers fighting on their street.

The image is so beautiful, but the story along with the photo filled in the story behind it, which captivated me. Thanks for sharing.

Laurel-Rain--Thank you for validating the story; I worried it was too much information

oh wow, what a story! Beautiful shot too.

Trish--Thanks! I've got this shot up as a poster in my library and it gets commented on all the time

Lovely !! makes me want to go Cambodia and experience the timelessness of the temples there, thanks for sharing.

Hi!
Awesome picture! The story behind the picture is great, thanks for sharing this part of your life. Have a great day!

Vithya--I absolutely loved Cambodia: the temples, the jungles, the history, it's all so fascinating

Sherrie--I'll admit it's one of my favorite travel experiences. It felt so risky at the time!

Wow! What a story...I want to travel to so many places but then I get all scared about the very things that happened to you. But, then again, I am teased by all the places I've never seen or gone...I bet you'll never forget that trip...for a LOT of reason :)

That must have been an amazing experience. I am so jealous! Great shot, by the way.

That is an amazing story and photo! You must have been so worried about your family during that time.

What a great photo! How awesome it must have been to be there in person!

You can find my SS HERE

Wow. Definitely a great photo, but I don't know that I would have been brave enough to risk it. Very glad that you were safe!

Got mine up if you'd like to take a peek: http://myreadersblock.blogspot.com/2011/01/saturday-snapshot-january-15.html

Peppermint--It's funny, the story makes me sound all brave, but at the time I felt pretty safe. There really was a kiosk in the middle of the jungle!

J.L.--I do love my travel photography, but I wish I was braver at getting photos of people close up

Alyce--We were definitely worried about my brother and sister-in-law; it was a crazy week! Luckily, it all turned out alright for them (I'd say less well for many Cambodians)

Ellie--I definitely felt like I was experiencing history. Then when I returned home and taught about Cambodia and the Khmer Rouge to my students I definitely felt a passion for the lessosns

Bev--I am going to go check out your link right now!

Bribe and all, that gave me quite a chuckle! It's the kind of thing I am so used to hearing in India too.

I'd love to visit those temples! How very wonderful! But what a horrible experience for your family to be locked in their apartment! Love this photo - one of those that lets you reminisce!

Aths--Great that you can relate to the bribing! I do feel that travel to certain parts of the world is full of "negotiations"

What an awesome, and unique photo Helen; great job.

Leslie (Under My Apple Tree) said...

Every picture has a story and this is a fascinating one. Thanks for sharing.

Leslie--That's a nice way of saying it and I totally agree. That's one of the things I really like about this meme... we get the stories behind the photos