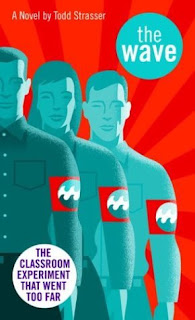 Title: The Wave
Author: Todd Strasser
Genre: YA
Pages: 138
Rating: 5 out of 5
FTC Disclosure: I borrowed this book from my school library
Summary (from the back of the book): The Wave is based on an incident that took place in a high school history class in Palo Alto, California in 1969. Ben Ross and his history class are about to learn a lesson they will never forget. As they study World War II Ben Ross's students can't seem to understand how they German people could have followed Hitler and the Nazis. So Mr. Ross creates an experimental movement called the Wave. What begins in a single classroom quickly gathers momentum. Before the end of the week, the Wave motto "Strength Through Discipline. Strength Through Community. Strength Through Action." governs the entire school. Only two students, Laurie Saunders and David Collins, recognize the Wave for what it is and set out to stop it before it's too late. But is history destined to repeat itself?

Review: I had heard of the Wave (the real incident, not the book) for years, ever since I began teaching World History in the mid-1990s. Why didn't I ever get the details? I am not sure. However, I now want to know more about what really happened. Todd Strasser's novel is gripping, feels very real, and makes the reader realize how easily people can be lured into joining a group, even if the effects are not good.

When I taught World History and we got to the rise of fascism, World War II, and the Holocaust students were always quick to say that the Germans were horrible people, that they should have stood up to the Nazis, why did they go along and I had a difficult time explaining to them that mob mentality is a strong thing. We did a lot of talking about going along with the crowd, being scared to speak out, choosing what to know and what not to know was happening around them. I never really knew if my students truly got it or not. The one part I knew I did get through to them was when students would say, "but Jews were disappearing, how could they not notice?" I pointed out that Jews were only 10% of the German population; there were towns that had only a few Jewish families. I also asked them what happened to students who had disappeared from our own class (there is always one student who moves away mid-term). This question usually made them go silent. My standard response was, "I don't know what happened to him/her. I've been told the family moved, but how do I know that's true?" I think that helped my students understand a small part of how the Nazis were successful.

The Wave was a wonderful experiment that went horribly wrong, but it only went wrong because of human nature. We want to belong, to be part of the group, to feel like we're part of something bigger than ourselves. And if belonging means privilege (best seats at a football game, best tables in the cafeteria, not getting teased) then all the better. And, high school students are particularly impressionable and susceptible. This novel does a great job at showing how easy it was for the teacher to create the group (give it a name, a motto and a salute and you're good to go), to get followers, and how difficult it was to stop the natural momentum of a mob.

For me it's particularly creepy because I see this kind of attitude in some of the students at my school in regards to one of our teachers. They have little sayings that only they know, sounds/gestures that they make, etc. Definitely a cult of personality. And the teacher encourages it. I am not saying that the situation at my school is like the Wave; it is not dangerous, but it is elitist and exclusionary.

The real teacher, Ron Jones, has created a Wave website tracking the ways that their real story has impacted the people, the places it appears (TV shows, books, etc). If you are interested in the real Wave story, definitely check out the website.

Email ThisBlogThis!Share to TwitterShare to FacebookShare to Pinterest
Labels: 5 Stars, Historical Fiction, YA

How interesting! I somehow haven't heard of the Wave before, and it sounds fascinating (and a bit scary)--I'll go look for this book.

Katy--The Wave is definitely scary. I think if it was just fiction it would be good, but because the reader knows it's based on reality, it takes on a whole new level of interesting

I like the approach you used to teach about the German mindset during the war. At the outset, it really is easy to blame one country or the other, but deep down, there are so many layers, that you cannot ask any straight question. It's so important that kids/teens today do not get prejudiced over the topic of war issues.

I never heard of The Wave. I just googled and read up about it, and wow, it was surely scary stuff. I'm not surprised though - my native country has a pretty volatile environment and mob power is something we see everyday. But it doesn't become less scary even with such ubiquity. I really want to read this book now.

Aths--Issues surrounding "what would you do" were so much fun to teach! The Wave is really interesting stuff, both in reality and in this novel. Mob mentality is just a scary thing.