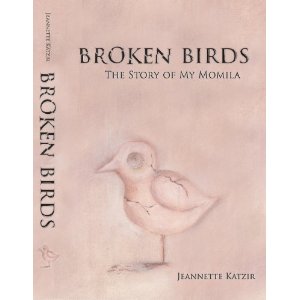 Title: Broken Birds
Author: Jeannette Katzir
Genre: Holocaust literature
Pages: 374
Rating: 3.5 out of 5
FTC Disclosure: The author sent me this book for review
Summary (from the back of the book): World War II has long since ended, and yet Jaclyn and her four brothers and sisters grew up learning to survive it. Having lived through the Holocaust on the principle of constant distrust, their mother, Channa, dutifully teaches her children to cling to one another while casting a suspicious eye to the outside world. When Channa dies, the unexpected contents of her will force her adult children to face years of suppressed indignation. For Jacyln and her siblings, the greatest war will not be against strangers, but against one another. Broken Birds, the Story of My Momila is Jeannette Katzir's achingly honest memoir of the enduring effects of war. From her parents' harrowing experiences during the Holocaust to her own personal battles, Katzir exposes the maladies of heart and mind that those broken by war, inevitably and unintentionally pass down to the generations that follow.

Review: I did my Master's Degree work on the Holocaust and have read a lot about it, but I was still interested to read this book since it seemed that it was going to take a different look at the Holocaust: the impact it had on future generations. However, I found that the parts of this book that I enjoyed the most were in the beginning with the stories of Channa, her parents, Nathan (her husband) and his family were told. I liked reading about their lives in Eastern Europe, their experiences during World War II and how Channa and Nathan survived. I also liked near the end when Nathan and his children returned to Eastern Europe and retraced his life steps. I have been to Munich and Dachau so that part in particular was very vivid for me.

Actually, the first half of the book was most interesting to me because it told of Channa and Nathan's early years in America, trying to raise a family, and make their way as immigrants in the 1950s and '60s. I am always impressed with how much that generation gave of themselves, how hard they worked, and how they accomplished the "American Dream". That part of the Potzer family story is like the stories of so many immigrant families, but it is good to be reminded of that.

The second half of the book was less interesting to me though I realize it is really the climax of the author's story: how the family fell apart and how she sees this as a result of beings survivors' children. I read it as a never-ending barrage of family in-fighting, arguing, and distrust. While I understand that this is her family's experience, I don't think this is typical of survivor's children. In our town I know a number of survivor's children and this has not been their experience.

The author's story is one that makes me so sad; how can a family turn on itself from the very start. As soon as the children were adults they fought with one another, deceived one another, and ruined familial relationships for the future generations. I am so close to my family and cannot imagine what it would take to tear my brother and I apart the way the siblings in this family did. Money, greed, lying, and needy spouses all played a role and I just felt deflated at the end. I didn't see a good resolution for any of the siblings and that is tragic.

I just read another review for this book yesterday. I am intrigued by what I've read. Thanks for your honest review Helen.

Diane--I should check out other people's reviews to see what they thought of it. Turns out the author has heard that readers like the beginning part so she's written a book about the Holocaust portion of her mother's life (the mom was with partisans)

I am the author and yes it is true that I have written a fictional prequel of my mother's time in the forest. It should be out 2011.
Jeannette Katzir