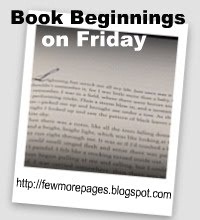 This meme is hosted by Katy at A Few More Pages
Murder on the Down Low by Pamela Samuels Young is a good old fashioned mystery and it's a genre I really like. Although I have started it now, I won't finish it until early January for two really good reasons: (1) It's for a TLC Blog Tour and I am posting on January 5. I want the book to be mostly fresh in my mind when I post about it and (2) I want the book to count for the 2011 Mystery and Suspense Challenge. But so far I am liking the book.

"Dr. Quentin Banks was a man's man. The kind of guy other men liked being around. Handsome, but not a pretty boy. Wealthy, but not a showoff. Versatile enough to host a fundraiser one night and chill with his buddies over a game of dominoes the next."
This is a good set up for the book. It's about successful African-American men who are being killed. The main characters are four women friends who are connected to the murders (a cop, 2 lawyers, and an angry friend).

You're right...great set-up for the book. Sounds like a good one! I love a good mystery.

I'd read this book based on this first few lines!

This book sounds interesting! :) I'll be looking forward to your review.

Thanks for participating in Book Beginnings!