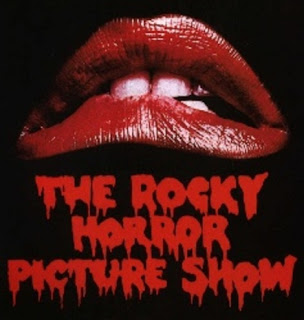 Ok, it's almost Halloween and I haven't even mentioned it yet. I do like Halloween, but I don't like watching scary movies or reading scary books. What I like is dressing up in costume, becoming someone or something else for a day. I've always liked that.

One other thing that is Halloween-related that I enjoy is the Rocky Horror Picture Show. I've been a number of times, though it has been many, many years since my last viewing. The year I lived in Germany my friends and I watched the movie in our living room one night. Have you ever done that? Just watched the film, without all the crazies on the stage, without the toast, the newspapers and the costumes? It's strange. We started out saying the "extra" lines, but realized it just wasn't the same as being in the theater. But, we were living abroad and wanted something of home, so we watched the movie.

Last night's Glee episode was all about the Rocky Horror Picture Show and it was, in a word, FABULOUS! John Stamos' number was awesome. I found myself singing along with all the songs (who knew they were still in the far recesses of my brain!), being impressed with the costumes, covering my daughter's eyes for one of the songs, and explaining to her what it's like to see the real thing in the theater.

It's put me in the mood to see a midnight showing!


How about you? Have you seen Rocky Horror? Have any good stories to share?

I've never seen Glee, but I do like Rocky Horror! Actually, I like the first 2/3rds of it, but the end sort of drags for me.

I just watched the Glee episode on Hulu today. Since we live in the middle of nowhere, we finally showed our teenagers the DVD of Rocky Horror about a year ago--it's a weird way to watch it, alone in your own house, but we made up for it by remembering more of the lines than we thought we could.
I loved Sue's line about how they threw toast at her when she went.

Jeanne--Sue Sylvester is SO funny and the toast line was classic. I just read an article about the guy who writes her one-liners. What an awesome job to have