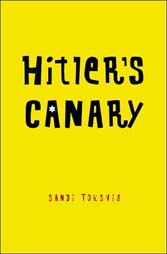 Title: Hitler's Canary
Author: Sandi Toksvig
Genre: YA historical fiction
Pages: 191
Rating: 4.5 out of 5
Challenges: YA
FTC Disclosure: I borrowed this book from my school library
Summary (from the inside flap): Bamse is used to drama--his mother is a famous actress, and his best friend, Anton, is one of the most daring boys in all of Denmark. But this is different. He knows he should be afraid, but he doesn't know yet what he should be afraid of. The Germans? The British? The French?

"We were theater people. We didn't get involved in these things. It had nothing to do with us," he says. Yet now Bamse must decide: should he take his father's advice and not stir up trouble? Or should he follow his brother into the Resistance and take part in the most demanding role of his life?

Review: I have read a lot of World War II and Holocaust memoirs and books, but I just can't quite seem to get enough of them. What appealed to me most about this novel is that it is about that time period in Denmark. I have read a bit about Denmark in WWII and how the Danes helped their Jewish citizens, but this novel added even more to my knowledge.

The author based the book on her family's experience working in the resistance and helping the Jewish Danes to escape to Sweden. That lends even more credibility to the story and that's a good thing. The main character's mother is an actress so the chapters are like those in a play (Act I, Scene 1, etc). It kind of an interesting twist on the usual chapter titles.

The story of the Danish people during WWII is a wonderful one and the country is usually held up as an example of how a country can stand up to an occupying force and do the right thing. What I liked about this book is that the author points out times when German soldiers did the right thing and allowed Jews to escape, didn't turn Danes in who were in the resistance, all at personal peril. I think that's important: all Germans were bad and all Danes weren't good. Nations and their citizens aren't all right and all wrong, people are individuals. We would do well to remember this today.

I had not heard of this book yet. Thanks for the lead--I am trying to develop a collection of WWII/ Holocaust-related lit for my students. This sounds like a good one to add to the pile.

I can't get enough of WWII and the Holocaust either - and since I'm of Danish heritage I'm definitely going to put this book on my to-read list. Thanks for bringing it to my attention.

The author is one of the presenters of a travel program on BBC Radio called Excess Baggage that I listen to by podcast and she is great -- I can't wait to read her book.

There are not many Holocaust books set in Denmark, so this is a welcome change. I love books set in WW2 period too!

Mrs. DeRaps--I think this is a good one for high schoolers (or middle school). It's not difficult, is part of WWII they won't read much about, and for the reluctant readers, it isn't too long

Suzanne--Oh, you're Danish, then it's a must read. I loved Denmark when I was there! I had no idea the author did a radio show!

Aths--I thought of you when I read this one knowing how much you like WWII books.