Review: Every Little thing in the World (de Gramont) 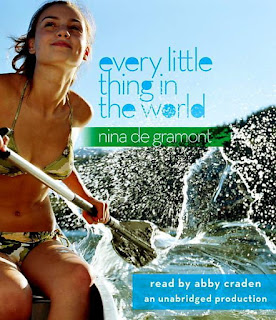 Title: Every Little Thing in the World
Author: Nina de Gramont
Genre: YA fiction
Pages: 282
Rating: 5 out of 5
Challenges: YA
FTC Disclosure: I borrowed this book from my school library
Summary (from the inside flap): Sixteen-year-old Sydney Biggs is a "good kid"--smart, pretty, self-aware. No one doubts that she'll go far in life. But lately her mother worries that Sydney is wandering down the wrong path and getting all caught up in petty teenage rebellion and shenanigans. When Sydney and her best friend, Natalia, "borrow" a car to go to a party and then get escorted home by the police, their parents pack them up and ship them off to a hard-love wilderness camp to stop this behavior before it gets out of hand, before things go too far. The problem is, they already have.

Sydney the "good kid" is pregnant. In the wilds of Canada--where the girls are to spend the next four weeks canoeing, camping, and foraging for food--time is ticking, because sydney isn't sure what she wants to do about this baby. And she certainly isn't expecting the other heady issues that will confront her as she forges friendships with her adventure mates, including a guy who makes it no secret that he is a major thug, and a teen television heartthrob with a secret of his own, not to mention her own best friend--who is very adamant about what Sydney should do.

Review: I haven't seen much about this book on the blogs I read, but I must have seen enough to order it for my library. It wasn't really on my radar when one of our students checked it out. I did my usual "Let me know what you think of it when you're finished" figuring she wouldn't. Wrong! She brought it back the next day and raved about it. So, I checked it out and finished it in 2 days. I really liked it!


The issue of Sydney's pregnancy is ever-present in the book. What should she do? What is morally right? How would her life change if she had a baby? Would she really be able to give it up for adoption or would she want to keep it? What if she had an abortion? There is no judgement as the debate rages between Sydney and her friend Natalia and within Sydney's own thoughts.
PS. I just looked up French Camp and discovered they do family weekends! I love the San Juan Islands area and have been meaning to spend a short vacation there with my daughter... hmmmmmm. The wheels are spinning. I wonder how strange it would be to return to a summer camp as an adult.

This book looks really good! I just added it to my TBR list on Goodreads. Thanks for the great review! :)

I love books like this one which focus on real hard issues, in a way that makes the reader also question things. This looks like something I should check!

Morgan--Thanks for stopping by! This really was a good book; I can't wait to hear what others think of it

Aths--I thought the author did a really great job of dealing with a difficult issue without being preachy, which is so difficult to do.