Review: Half the Sky (Kristof and WuDunn) and Give Away 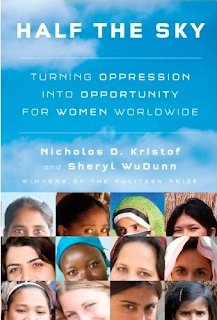 Title: Half the Sky: Turning Oppression into Opportunity for Women Worldwide
Authors: Nicholas Kristoff and Sheryl WuDunn
Genre: Non-fiction
Pages: 295 (including index and appendices)
Rating: 4.5 out of 5
Challenges: Women Unbound; POC; Social Justice (August: Illiteracy and education); MUS Moms book group
FTC Disclosure: I received this as a gift
Summary (from the inside flap): From two of our most fiercely moral voices, a passionate call to arms against our era's most pervasive human rights violation: the oppression of women and girls in the developing world. With Pulitzer Prize winners Nicholas Kristof and Sheryl WuDunn as our guides, we undertake an odyssey through Africa and Asia to meet the extraordinary women struggling there, among them a Cambodian teenager sold into sex slavery and an Ethiopian woman who suffered devastating injuries during childbirth. Drawing on the breadth of their combined reporting experience, Kristof and WuDunn depict our world with anger, sadness, clarity, and ultimately, hope.

They show how a little help can transform the lives of women and girls abroad. That Cambodian girl eventually escaped from her brothel and, with assistance from an aid group, built a thriving retail business that supports her family. The Ethiopian woman had her injuries repaired and in time became a surgeon. A Zimbabwean mother of five, counseled to return to school, earned her doctorate and became an expert on AIDS.

Through these stories, Kristof and WuDunn help us see that the key to economic progress lies in unleashing women's potential. They make clear how so many people have helped to do just that, and how we can each do our part. Throughout much of the world, the greatest exploited economic resource is the female half of the population. Countries such as China have prospered precisely because they emancipated women and brought them into the formal economy. Unleashing that process globally is not only the right thing to do; it's also the best strategy for fighting poverty.

Review: I started out reading this book only at night as I went to bed. Bad plan since I'd last only about 15 minutes and it felt like the book was just taking way too long to read. Two days ago I committed to reading it as my main book and... success! I found this book informative, powerful, interesting, and encouraging.

Most of the general information in this book was not new to me: trafficking (mostly sex trafficking where young girls end up in brothels); genital mutilation; rape as a tool of war and revenge; micro-lending; honor killings; and lack of education for girls and women. However, Kristoff and WuDunn made a wise decision when they wrote this book. They talk in general numbers for only a small portion; most of the book is individual stories of girls and women, something that reduces the huge numbers to a person we can imagine. Each woman's photo is in the book, which also helps to put a face on the problem.

One of my favorite aspects of this book is that it is not a litany of women who have suffered, a diatribe against men who are awful, a tirade against countries/cultures who suppress/oppress women. Each woman featured in this book, after suffering horrible circumstances, decides to do something about it. They speak out, they get an education, they say "no", they change the rules, they start a business, or in some way turn life around for themselves, their children, and usually, their community. They battle presidents, their families, their villages, and history to make  difference. Sometimes they have help from outside agencies and sometimes from one or two caring individuals, but either way, they come out successful. That was so inspiring.

One of the best lines in the book is when the authors say that the role of Americans (read: those in developed countries) in helping these women should be to write checks and stand at the back of the room carrying the baggage. In other words, ensure that the women in these countries speak for themselves and are at the forefront of the change. That is just awesome!

The areas that the authors feel we should concentrate our efforts on are:


On page 234 they state that "women's issues are marginalized... sex trafficking and mass rape should no more be seen as women's issues than slavery was a black issue and the Holocaust was a Jewish issue. These are all humanitarian concerns, transcending any one race, gender, or creed." Well said!
At the end of the book Kristof and WuDunn have short sections on what we (those in developing nations) can do to help. They have lists of agencies that are effective at making lives better for girls and women in developing nations, have fairly low overhead, etc. I am going to do a post next about donating/charity in general and would love you to give your two cents worth in comments on that post.

I like that aspect of helping these women by giving them the support to use their own voice and do something about it. It is about creating the opportunity for others to discover their power. Thanks so much.

Helen, I know you have already read my review, but maybe some of your readers would like to see it and the WuDunn video I found:
http://bonniesbooks.blogspot.com/2010/03/half-sky-by-nicholas-d-kristof-and.html

I have been wanting to read this book for some time. I am always impressed by the efforts of those who work to improve the lives of women across the globe. I look forward to your compilation of organizations and charities.

Bonnie--Thank you for reminding me of your blog post and video on this. You'll see I added it to the post

Thanks for highlighting this book! I think it's a great book for the book-blogging community as we're predominantly well-educated American women and there's a lot we could do.

Bookworm--good point that it's a great book for our community. The book is filled with inspirational stories of women who have worked really hard against cultural norms to make something of themselves.

Well, I'm so glad I read your review! I had only heard of this one, but never added it to my TBR yet. I'm going to do that now!