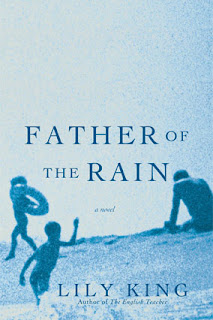 Title: Father of the Rain

FTC Disclosure: My mom bought this book and will surely share it with friends

Summary (from the back of the book): Prize-winning author Lily King's masterful new novel spans three decades of a volatile relationship between a frighteningly charismatic, alcoholic father and the daughter who cannot help but love him. Gardiner Amory is a New England WASP who is beginning to feel the cracks in his empire. Nixon is about to be impeached, his wife is leaving him, and his worldview is rapidly becoming outdated. His daughter, Daley, has spent the first eleven years of her life carefully negoitating her parents' conflicting worlds: the liberal, socially commited realm of her mother and the conservative, decadent, liquor-soaked life of her father. But when they divorce, and Gardiner's basest impulses are unleashed, the chasm quickly widens and Daley finds herself stretched thinly across it.

As she grows into adulthood, Daley rejects the narrow world that nourished her father's fears and prejudices, and embarks on her own separate life--until he hits rock bottom. Lured back home by the dream of getting her father sober and rebuilding a trust that was broken years ago, Daley risks losing everything she has found beyond him, including her new love, Jonathan, who represents so much of what Daley's father claims to hate, and who has given her so much of what he could never provide.

Review (by my mom): This book is beautifully written. Lily King's characters are so real and I can picture being in the scenes. She also did a wonderful job of showing the changing times of small town New England.

The era--the 1970s and all its political turmoil and social change--were great back drops, showing the life of the liberal mom who included the African American kids at pool parties juxtaposed with the hard-drinking conservative exclusive country club life of her father where African Americans were there to serve the members.

It was both painful and beautiful to experience Daley's childhood and young adult years. It made me think about the struggles in a marriage, and the children's lives in marriages that aren't working and in marriages that fall apart when spouses go their separate ways. This made me want to read her other two books.

This is one that is on my wish list; sounds good.

Wow.. this sounds amazing. Your mom has written a beautiful review. I'm going to add it to my TBR.

I've heard some great chatter about this book lately and you did a great job of reviewing it! I'm putting in on my TBR list now! Thanks for sharing!

Bibliophile, Aths, and Suzanne--That's so funny; I hadn't heard about it in the blogosphere. We bought it at a signing with the author so that was really fun. Her mom is our neighbor. Wait, maybe I should do a give away with our signed copy! I'll see if mom is willing to donate it.