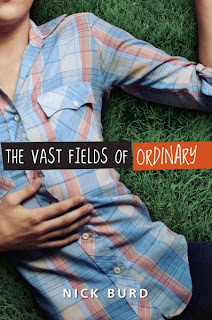 Title: The Vast Fields of Ordinary
Author: Nick Burd
Genre: YA fiction, LGBTQ, Romance
Pages: 309
Rating: 4.5 out of 5
Challenges: POC (author), GLBT
Summary (from the inside flap): It's Dade Hamilton's last summer before college. He has a crapy job at Food World, a "boyfriend" who won't publicly acknowledge his existence (maybe because Pablo also has a girlfriend, one of the most popular girls in school), and parents on the verge of a break up. Add to all this the case of Jenny Moore, a nine-year-old whose disappearance has gripped his Iowa town, and Dade's main goal is just to survive until he leaves for school. Then he meets the mysterious Alex Kincaid, a dreamy-eyed misfit with all the wrong friends. Alex breathes new life into the suburban wasteland that Dade can't wait to escape--but real love, like truth, has consequences, and its power soon sets in motion a tragic chain of events that will change Dade's life forever.

Review: This book is beautifully written! I enjoyed it from the first page. I like the voice of Dade, the narrator, and his outlook on life. He is just a normal guy: not too popular, not too on the outside, knows who he is, but isn't telling anyone about it. And, he struggles with relationships; he wants more out of them than he is getting, from his friends, his parents, and his "boyfriend". Like so many of us, he doesn't really know what he wants and therefore can't express it to those in his life. I think in the end he starts to figure himself out and that does tend to happen as one moves away from home and high school. The journey is certainly not over then (that would make life dull), but Dade seems well on his way to finding happiness and contentment with who he is.

One thing I wasn't thrilled with was the story line of Jenny Moore, the missing girl. I am not sure what her role was in the book. I am sure she had a purpose or why would the author have included her, but I don't see that her tangent added to the book.

I also liked Dade's friendship with Lucy, his crush on Alex, and his ongoing run-ins with certain students at his high school. All of this seemed very real and accurate. Dade didn't like these people really, but he kept interacting with them; that is something I see a lot at the high school and I want to say (and sometimes do) "just don't go places they'll be if you don't want to deal with them". But, in life, that is easier said than done.

Overall this book is really good. The writing, the story line, the characters are all believable, real, and interesting.


Have you read this book? Did you like it?

Email ThisBlogThis!Share to TwitterShare to FacebookShare to Pinterest
Labels: 4.5 Stars, LGBTQ, POC, YA

Wow - this books sounds like quite a read... I'll be looking into reading it soon :)

Reederreads--I saw this book get positive reviews elsewhere and definitely agree with them. It's a quick read, but deals with "stuff" so well!

I liked this novel too! Lucy was, hands down, my favorite character.

Stephanie--Lucy was awesome. So honest, confident, supportive and fun! And the main character needed her in order to move forward!