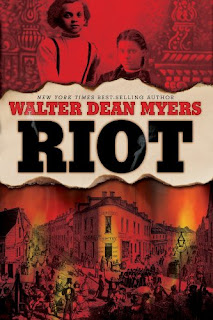 Title: Riot
Author: Walter Dean Myers
Genre: YA, Historical Fiction
Pages: 164
Rating: 4 out of 5
FTC Disclosure: I borrowed this book from my school's library
Challenges: POC
Summary (from the inside flap): During the long, hot July in 1863, the worst race riots the United States has ever seen erupt in New York City. Earlier that year, desperate for more Union soldiers, President Abraham LIncoln instituted a draft--a draft that would allow the wealthy to escape serving in the army by paying a $300 waiver, more than a year's income for the recent immigrant Irish. And on July 11, as the first drawing takes place in lower Manhattan, the city of New York explodes in rage and fire. Stores are looted, buildings set on fire, and black Americans are attacked, beaten, and murdered. The police cannot hold out against the rioters, and finally, battle-hardened soldiers are ordered back from the fields of Gettysburg to put down the insurrection, which they do--brutally. Fifteen year old Claire, the beloved daughter of a black father and Irish mother, finds herself torn between the two warring sides. Faced with the breakdown of the city--the home--she has loved, Claire must discover the strength and resilience to address the new world in which she finds herself, and to begin the hard journey of remaking herself and her identity.

Review: I am a huge Walter Dean Myers fan so was really excited to read this book. I also know nothing of the 1863 Race/Draft riots and enjoy learning about new historical events (remember, I used to teach history). But, it turns out I didn't love this book.

That said, there are things that I liked about it. It is written in the format of a play with a character list at the front and "stage" or camera directions in between the dialogue. Once you get into the rhythm of this style, it reads very quickly because there is mostly dialogue. He did really well with the description sections as well.

I found the whole plot interesting: a biracial main character (who deals with her issues of race in amongst everything else that's going on), friends who are both black and white, the anger of the Irish immigrants, and this whole side riot/event while the Civil War was being fought. I also liked that Myers included real photos and political cartoons/drawings from that week that he used as his inspiration for the book.


Have you read about these riots or events?

I taught about the Draft Riots in my class last year. I really want to read this book. I love his historical books. Have you read Fallen Angels? My students love that book.

I'm curious as to what you didn't like about this book? I didn't love it either, I wanted more descriptions, etc. I don't think it worked that well in script format.

The only other book about the 1863 Draft Riots that comes to mind is A Wish After Midnight :)

Booksnob--this book is good, but not great. It definitely gave me a very good sense of what it was like during the riots and it's a super quick read. I have not read Fallen Angels yet, but really liked Sunrise over Fallujah

Miss Attitude--I am not exactly sure what made me not love this book. The script format may be the culprit. It just didn't totally grab me.