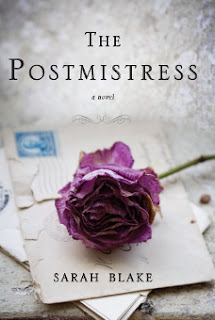 Title: The Postmistress
Author: Sarah Blake
Genre: Adult historical fiction
Pages: 318
Rating: 4 out of 5
FTC Disclosure: I got this book (on loan) as part of a blog tour through Crazy Book Tours
Summary (from the inside flap): It is 1940. While war is raging in Europe, in the United STates President Roosevelt promises he won't send American boys over to fight. Iris James is the postmistress of Franklin, MA, a small town on Cape Cod. Iris knows a lot more about the townspeople than she will ever say. She knows that Emma Trask has come to marry the town's young doctor. She knows that Harry Vale, the town's mechanic, inspects the ocean from the tower of the town hall, searching in vain for German U-boats he is certain will come. Iris firmly believes that her job is to deliver and keep people's secrets, to pass along the news of love and sorrow that letters carry. Yet one day Iris does the unthinkable: she slips a letter into her pocket. And then she does something even worse--she reads the letter, then doesn't deliver it.

Meanwhile, seemingly fearless American radio gal Frankie Bard is working with Edward E. Murrow, reporting from the Blitz in London. Frankie's radio dispatches crinkle across the Atlantic, imploring listeners to pay attention to what is going on as the Nazis bomb London nightly. Then, in the last, desperate trains out of Germany and reports what is happening. But while most of the townspeople of FRanklin are convinced that the war "overseas" can't touch them, Iris and Emma--unable to tear themselves away from Frankie's voice--know better.

Review: I first heard about this book on an NPR interview and wanted to read it. Then I saw it as an option on the Crazy Book Tour and it was also one of my summer reads for my MUS Moms book group. At first it didn't grab me; I felt like I couldn't concentrate on it for the first 20 pages or so. But then I hit my groove and I got into it.

World War II is one of my favorite eras for historical fiction so this book was right up my alley. I liked the descriptions of the Blitzkrieg in London, the Jews fleeing Poland and Germany, and the Americans worrying about the war coming to our country. I especially think the interviews Frankie conducted with the refugees in Europe were well done. It gave a face to characters that could have just been in the background, representing "Jews"; Blake gave them names and personalities.

I also liked that the story followed a whole town, but concentrated on three different women. Frankie was interesting as she was the vehicle to show us Europe during the war. Her radio broadcasts brought the story of Jewish refugees and life in London back to Amercians. Emma showed us life on the home front as her doctor husband went off to Europe. Though he wasn't in battle, she still worried for his safety. Iris showed us those at home who weren't directly affected by the war. However, she is the cog of the story; she runs the post office through which all information regarding the others characters passes through.

Though I liked all that I still wanted more, but I am not sure what I wanted to make me LOVE this book. Have you read this book? If so, what did you think?

I haven't heard of this book, but WW2 is one of my favorite things to read about. I may have to check this one out!

Marie--This book is certainly making the rounds. I'll be interested to see what my book group thinks of it in September

I haven't read this one, but I've been curious about it for a long while. Esp since I'm obsessed with reading about WW2.

Aths--What is it about WWII that fascinates us so much? I'll admit I enjoy WWI just as much!

I've been wanting to read this book for sometime. It sounded interesting, and I tend to like WWII books at times. I might have to add it to my library queue soon!

Bookish--I also really like WWII books and this one is definitely a different spin on the events. It's more WWII era than WWII