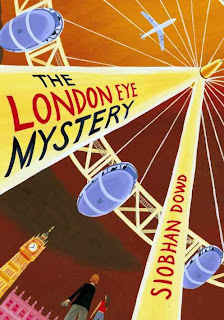 Title: London Eye Mystery
Author: Siobhan Dowd
Genre: YA, Mystery
Pages: 324
Rating: 4 out of 5
FTC Disclosure: I borrowed this book from my school's library
Summary (from the inside flap): When Aunt Gloria's son, Salim mysteriously disappears from a sealed pod on the London Eye, everyone is frantic. Has he spontaneously combusted? [Ted's theory] Has he been kidnapped? [Aunt Gloria's theory] Is he even still alive? [The family's unspoken fear.] Even the police are baffled. Ted, whose brain runs on its own unique operating system, and his older sister, Kat, overcome their prickly relationship to become sleuthing partners. They follow a trail of clues across London in a desperate bid to find their cousin, while time ticks dangerously by.

From the very start the reader is thrown into Ted's head. He is twelve years old and autistic (I think. Dowd never names his diagnosis though it is talked about by his family). He is obsessed with the weather and there is a lot of weather related talking/thinking from Ted. Honestly, I tended to skim when he got into weather, though some of it relates (very well) to the mood of the characters and the events that are taking place. In addition to the weather Ted uses numbers and counting in his everyday conversations and thinking (I ate my twelfth shreddie, I kicked the garden shed 87 times). Dowd has done a good job at getting inside his head and showing us how he sees the world. In fact, it is Ted's "different" way of seeing the world that solves the mystery (I am not spoiling anything here; it says this within the first few pages).

Dowd also did a good job with the family dynamics. The arguments, the love, the irritation, the tenderness, and the ignoring of Ted all seem realistic and helped me to appreciate the characters.

The mystery itself is good as well: a missing teenager. But how does someone enter a London Eye capsule and not get out after it's half hour ride? To find out, you'll have to read the London Eye Mystery!

Side note: While looking for Dowd's website I discovered she died of breast cancer in 2007. The link above will take you to the Siobhan Dowd Trust website. This is an organization that gets books into the hands of the poor in the United Kingdom.

This is a good story. I'm so sorry she's already gone. Such a loss.

Darlyn--yes, I hadn't read any of her books before, but we have 3 in my school's library. I will eventually get around to reading the other 2