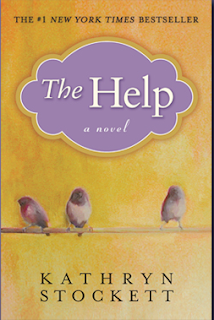 Title: The Help
Author: Kathryn Stockett
Genre: Adult Fiction
Pages: 454
Rating: 5 out of 5
Challenges: Women Unbound (#12), POC (#20)
FTC Disclosure: I bought this book twice. The first copy I gave as a present and the second copy I kept for myself.
Summary (from the inside flap): Three ordinary women are about to take one extraordinary step.... Twenty-two-year-old Skeeter has just returned home after graduating from Ole Miss. She may have a degree, but it is 1962, Mississippi, and her mother will not be happy until Skeeter has a ring on her finger. Skeeter would normally find solace with her beloved Constantine, the woman who raised her, but Constantine has disappeared and no one will tell Skeeter where she has gone.

Aibileen is a black maid, a wise, regal woman raising her seventeenth white child. Something has shifted inside her after the loss of her own son, who died while his bosses looked the other way. She is devoted to the little girl she looks after, though she knows both their hearts may be broken.

Minny, Aibileen's best friend, is short, fat, and perhaps the sassiest woman in Mississippi. She can cook like nobody's business, but she can't mind her tongue, so she's lost yet another job. Minny finally finds a position working for someone too new to town to know her reputation. But her new boss has secrets of her own.

Seemingly as different from one another as can be, these women will nonetheless come together for a clandestine project that will put them all at risk. And why? Because they are suffocating within the lines that define their town and their times. And sometimes lines are made to be crossed.

Review: This book starts out slowly, but I think that is because it takes time to get used to the way the southern women speak, Aibileen in particular. Once I got into the cadence and the rhythm, I powered through this book! I was fascinated (and disgusted) by the relationships between the white women and their African-American maids and among the white women. I enjoyed reading about the friendships among the African American women and, eventually, Skeeter. I was completely pulled into the gossip, the tragedy, the excitement of all of their lives.

Let me tell you that I am so glad that I was born when and where I was born (mid-1960s Michigan/California)! I like to think I would have had a difficult time with the racism, classism, and sexism that permeated these people's lives. However, if it was the way I was raised, probably not. And that scares me.

What was also amazing is the way women of all color were treated: get married, behave yourself, do what you're told, don't question, have babies, etc. As the saying goes, "we've come a long way baby!" But I realize that isn't true everywhere, which makes me sad.

This book was written by a white woman and I have mostly seen reviews by white women. I would be very interested to hear what women of color, particularly African American women, have to say about this book.

i really have to read this! and i agree with you, i think i would have really struggled with all the 'isms' of the time - i seem to have enough trouble putting up with it all in this day and age!

That whole Junior League thing just sounded miserable...having to conform to the majority opinion and all those judgmental women. Ugh.

Wonderful review, Helen! I have heard so much praise for this book, and will definitely read it before too long.

Terrific Review. I love reading reviews like yours and reliving this book yet once again; loved it!

Glad you loved this book! I loved it too! I found it interesting that most people didn't question they way they treat others or were treated, because they accepted it as a part of life. And that's why reforms take a long time coming.

I loved this book too-

and yes, we have come a long way! I enjoyed your review, and I like what you said about it taking a while to get into the cadence of how the characters speak. I think that was true for me too, and I am a Southerner!

Thank you to everyone for visiting!

I loved this book too and recommend it to everyone! It was fun to read your thoughts on it.