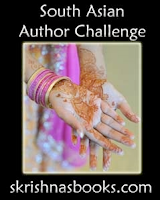 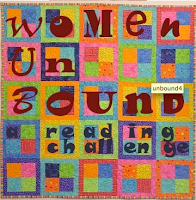 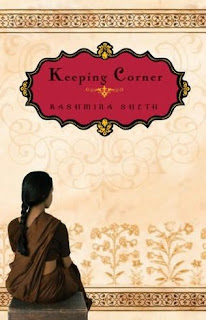 Title: Keeping Corner
Author: Kashmira Sheth
Genre: YA, Historical Fiction
Pages: 272
Rating: 4.5 out of 5 stars
FTC Disclosure: I borrowed this book from my school's library
Challenges: YA (#14), Women Unbound (#6), South Asian Authors (#2), POC (#17)
Summary (from the back of the book): Pretty as a peacock, twelve-year-old Leela has been spoiled all her life. She doesn't care for school and barely notices the growing unrest between the British colonists and her own countrymen. Why should she? Her future has been planned since her engagement at two and marriage at nine. Leela's whole life changes, though, when her husband dies. She is considered unlucky now, and will have to stay confined to her house for a year--keep corner--in preparation for al life of mourning for a boy she barely knew.

When her school teacher hears of Leela's fate, she offers to give her lessons at home. For the first time, despite her confinement, Leela opens her eyes to the changing world around her. India is suffering from a severe drought, and farmers are unable to pay taxes to the British. She learns about a new leader of the people, a man named Gandhi, who has started a political movement and practices satyagraha--non-violent protest--against the colonists as well as the caste system. The quiet strength of satyagraha may liberate her country. Could Leela use the same path to liberate herself?


Review: If you choose to read this book, which I think you should, be sure to keep going past page 60 or so when her husband dies, because that is when this book really comes into its own. I don't mean it's good that her husband dies, I mean that the book hits its stride at that point. Early on Sheth introduces a lot of Indian vocabulary (and its English equivalent), which feels a bit stilted. But after page 60 we just get the Indian and it begins to flow.

I really enjoyed reading this book. One of the aspects that I liked was reinforcing what I know about Gandhi and satyagraha, and seeing how it affected local people, rather than just how it is portrayed in movies and history books. The caste system is also prevalent (the main character is brahman and can only eat food cooked by a brahman...who knew?)

I knew nothing about keeping corner before reading this book, nor how widows are treated in some Indian communities. Through her studies during her year of mourning Leela learns about the wider world around her, the plight of her country men, Gandhi, inequality (and how to overcome it), and, most importantly, herself.

The idea of keeping corner is not one I am familiar with either. I can't imagine being forced, (at the age of 12!) to only wear a white sari and to have to give up all my hopes and dreams (although it says like the mc has mainaged to squash them).

I love reading about India. It has such a fascinating history! This book is on my Historical Fiction challenge list and I'm eager to read it.

I didn't know this term called 'Keep corner' either, and that's in spite of coming from India. But there do exist some unpleasant practices against widows in some communities, which is pretty backward. Most of the communities have snapped out of it but there are still places that dwell in it.

This book sounds good, nice review too!! I have to check it out.

Miss Attitude: she only got to wear a brown sari (somehow worse than white).

Aths, this book takes place during WWI so I am hoping that this practice has changed in most places

I read Homeless Bird by Gloria Whelan which also focuses on this topic. I'm going to have to add Keeping Corner to my TBR list.

There is a movie you might be interested in called Water that chronicles the lives of widows including a child widow in a village in India. There was controversy surrounding the making of the film and I heard that they had to move filming to Sri Lanka after receiving threats.

I am so looking for this. Do pick up Climbing the Stairs. I learned so much about holidays. This one is set during WWII

Thanks for the review.

Christina--I keep hearing about Homeless Bird so I'll have to add that to my TBR list (will I EVER catch up with that list?). I saw a movie called the Shape of Water (a friend of my parents made it). I wonder if it's the same movie? I follows various women in different parts of the world. If not, I'll add Water to my netflix

Susan-Climbing the Stairs is also on my list. I love WWII stuff so I'm sure I will enjoy it. Thanks for the reminder