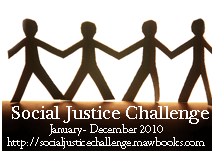 These questions come from the Social Justice Challenge. January's topic is Religious Freedom
What is the first thing that comes to your mind when you think of religious freedom?
To me religious freedom, at its most basic, is the right to practice the religion you choose and the right not to practice a religion. Like liberty this right ends if you harm others in your practice.
What knowledge do you have of present threats to religious freedom in our world today?
Throughout the world there are those who are not allowed to worship (or not worship) as they please. And throughout history religious freedom has been a point of contention (Eastern Europe under the communists, Puritans in England, etc). Of course, currently the Middle East comes to mind right away. Though I don’t believe they are being forbidden to practice their religion, conflicts between Sunni and Shiite Muslims in parts of the Middle East cause bloodshed on an on-going basis. Religion also plays an important role in the Israel/Palestine conflict.
Have you chosen a book or resource to read for this month?
I watched the video “Promises” recently and will probably count it for my January resource. It’s a documentary about Israeli and Palestinian teens, but I am not sure that it is really religious freedom based; it covers political, religious, and cultural issues.
Why does religious freedom matter to you?
In my daily life religious freedom isn’t an issue except that I do feel pressured by some to practice a religion. For me, the concern is more the role of religion in our political system: I think it doesn’t belong. However, on a global scale, religious freedom is vitally important as religion, and the right to choose what and how we worship, is at the core of so many people’s lives. For someone else to tell you what to believe or to harm you due to your beliefs is frightening and wrong.
Posted by Helen's Book Blog

Excellent post. I'm really bothered by the fact that religion is incoporated into politics and then tries to stick its nose where it shouldn't, in people's lives who may not want it (personally I don't think anyone has the right to tell you who you can marry as long as their consenting and it's monagamous).
Everyone should be allowed to practice whatever religion they wish and it makes me sad when one religious group is persecuted or no religion is allowed at all. Religion comforts people and gives them hope.

I am doing this one too... just waiting for the books I requested to come into the library,

Like you, I have tremendous concerns about the role of religion in politics. Promises sounds fascinating -- I look forward to hearing more.