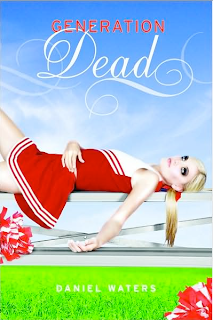 Genre: Fiction/Youth Lit/Zombies
Pages: 392
Rating: 4.5 out of 5
FTC Disclosure: I got this book from my school library
Challenges: Young Adult Reading Challenge (#2)
Summary: (from the back): All over the country, a strange phenomenon is occurring. Some teenagers who die aren't staying dead. But when they come back to life, they are no longer the same. Feared and misunderstood, they're doing their best to blend into a society that doesn't want them. The administration at Oakvale High attempts to be more welcoming of the "differently biotic", but the students don't want to take classes or eat in the cafeteria next to someone who isn't breathing. And there are no laws to protect the "living impaired" from people who want them to disappear--for good.


When Phoebe falls for Tommy Williams, the leader of the dead kids, no one can believe it: not her best friend, Margi, and especially not her neighbor Adam, the star of the football team--and others won't stand for it. Adam has feelings for Phoebe that run much deeper than just friendship; he would do anything for her. But what if protecting Tommy is the one thing that would make her happy?

Review: This book was really fun, which seems strange to say given that it is about zombies and bigotry. Throughout the book I felt like the words zombie, differently biotic, and living impaired (and what great PC terms they are!) could have been replaced with African-American, negro, and other terms. But I liked that because it made the issues in this book seem real: how do we treat those that are different from us? How does society protect those who are maginalized and living outside the mainstream?


I also liked the way Waters dealt with friends and crushes and family. Phoebe and her friends disagree and fight, but they back each other up in the end, even when they aren't sure it's the right thing to do. 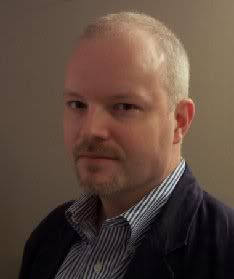 I am so excited that Dan Waters took time out of his holiday schedule to answer some questions...

I liked that Generation Dead wasn’t all about the gross side of zombies. What do you think makes a good “zombie” book?
Plot, character, theme, setting.  And at least one zombie. I like zombie books of all types.  My favorite zombie books--my favorite books, in general--tend to be those that have an element of social commentary (like The Stepford Wives) at their core. Books that provide food for thought, in other words. You know. Braaaaaaaiinnnsss.

What was your inspiration for Generation Dead?
The initial idea for Generation Dead came from some news magazine show I’d seen on violence in schools. According to the program, it was becoming all the rage in schools across America to video tape planned fights or random acts of violence and put them up on YouTube for the entire world to enjoy. The story came out of me being very, very disturbed by the segment.

One of the main themes that I took away from reading Generation Dead is integration, acceptance and dealing with ignorance. As I read my mind often wandered (in a good way) to the 1960s in our country and the way that African-Americans were treated. Was this your intention? If so, do your readers tend to get that and how do they respond if they do?
I wanted to comment here and there on how we treat each other.  There are points in the book where I am deliberately drawing a parallel to a specific social struggle, past, present, or future, in our society.  There are certainly points in the book that could be perceived as referring to the civil rights struggles of the 1960s, but one of the most gratifying things to me as an author has been the range of response I've gotten from readers who have drawn parallels to all manner of topics and issues--race issues, gender issues, the struggle for gay rights, what it is like to be handicapped, or something as simple as a feeling that you don't belong. Other readers miss or overlook all of that stuff and enjoy or don't enjoy a story about zombies.

I really liked the relationship between Phoebe and Adam and was totally taken by surprise in the end! Do readers respond strongly to that turn of events?
Thank you. The ending usually provokes a strong reaction from readers, either positively or negatively, with some going as far as to call the ending a cliffhanger (which it isn't, really, although it could have been one with a changed sentence or two).  The ending is one of several aspects of the book that readers seem to be divided on, with some saying as you do that it took them by surprise and others saying that it was telegraphed from miles away. I'm thrilled by the division; as with the thematic threads that you allude to in your previous question, I'd much rather that people come away wanting to discuss what they read that feeling like they "agreed" with me.

Do you have a favorite scene or character in Generation Dead?
I don't, really.  My favorite character really is the one I happen to be working with at a given time.

Where and when do you like to write? Is there anything you need to have with you during the process?
I'm fortunate in that I am very portable. I can write anywhere, anytime, and all manner of chaos can be exploding around me and it really doesn't bother me. I have a nice office in my house with a lava lamp and incense but I like a change of scenery every now and then as well. I don't normally have any fetishes or talismans I need to have with me to get going, either, but I'm always open to hear what works for others.

How has technology affected the way you write or the way you publicize your books?
Well, I used to say that it enabled me to get my rejections faster. But I started writing when I was still a kid--I asked for and received an electric typewriter one early Christmas--and clearly writing and the editorial process is accelerated, which for me is a good thing--I tend to be at my best when I'm working quickly and not stopping for speed bumps along the way, and I can remember working on the typewriter and being afraid of making a mistake because it was such a pain to go back and fix. For others, I think, the reverse is probably true where a slow process works better for them.

In terms of publicity, I think the main difference for authors of today vs. yesterday is the accessibility that the readership has to them. Some writers love the public eye and do wonderful things through social media, etc. to connect with their readership, while many other writers are basically folks who would prefer to live a sequestered, hermetic existence away from the spotlight.  I think I'm somewhere in the middle of that continuum; I have a lot of fun with the character blog I do, www.mysocalledundeath.com, which could be considered to be a technologically driven way to publicize my books, but I'm not as comfortable with the more personal aspects of social media-driven publicity. I'm trying, though.  I guess.

Are you going on tour for Generation Dead or a more recent book? Where and when?
My publisher was kind enough to send me on a number of engagements for both Generation Dead and Kiss of Life. Rumor has it we'll be doing something next summer when the third book in the series comes out as well.

How does it feel to see your books in book stores?
Horrible. To see all of those copies, languishing unsold on dusty bookstore shelves.... Seriously, it is one of the greatest pleasures of my life.

Have you heard much from your readers? Do you have a favorite comment or question that you have heard?
I'm very blessed to hear from readers through a number of channels--Facebook, my website www.danielwaters.com and Tommy's website www.mysocalledundeath.com, which I try to maintain as both a platform for readers to interact with the characters of the stories and a vehicle to tell stories that fall out of the scope of the novels. Tommy gets about five times as much email as I do. One of my favorite questions, which I get with surprising frequency, is "Are zombies real?"

What book are you working on now?
I just finished the third book in the Generation Dead series, which is called Passing Strange.  It will be out next June. I'm also putting the finishing touches on an unrelated YA book with the working title of Shiny Happy People.

Who is your favorite YA author to read and why?
I'd have to say J.D. Salinger because in my mind he invented the category, although I'm sure there are many who would disagree with that statement.

Who would you like to meet and why?
J.D. Salinger, Stephen King, the surviving Beatles and members of Pink Floyd.  To say thanks.

If you couldn’t be an author, what would you do? Spontaneously combust.

Email ThisBlogThis!Share to TwitterShare to FacebookShare to Pinterest
Labels: 4.5 Stars, Author Interview, YA

Remember the advice from Bowfinger: "Even though I sometimes feel I might ignite, I probably won't."