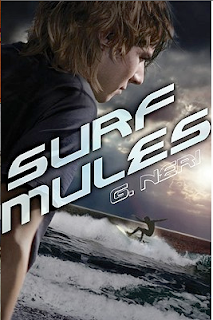 Pages: 273
Awards: Reviewed in Booklist, Publishers Weekly, School Library Journal, Voice of Youth Advocated (VOYA)
Rating: 4.5 out of 5
Summary: (from the back of the book) When Logan goes searching for the Perfect Monster Wave, he doesn’t expect his former best friend to be killed by it. Add to this a deadbeat dad who bankrupted his family and the possibility of college going down the drain, and Logan is suddenly in a tailspin. So when small-time dealer Broza offers Logan and his dropout pal, Z-boy, a summer job that could make them rich, it seems his problems might be solved. But between Z-boy’s constant screw-ups, a band of Nazi surfers out for blood, and a mysterious stranger on their tail, Logan is starting to have some serious doubts about hauling contraband across country, and hopes just to make it home alive.

Review:  Surf Mules has been on my TBR for a while now (along with SO many other books). Then, out of the blue I got an email from Stacy Barney from Penguin saying she is the editor for Surf Mules and would I like a free copy to read. Absolutely! I don't know if you remember how excited you were the first time someone sent you a free book because of your blog, but I actually did a little happy dance. My daughter thought I was nuts until I explained why, then she joined in.

One of the reasons I wanted to read this book is that it is YA aimed at guys; it seems so easy to find fun and good YA for girls, but when boys come into my high school library I am at more of a loss of what to recommend beyond the usual science-fiction and fantasy. So, I am very excited to add Surf Mules to my recommendation list.
I very quickly got pulled into the lives of Z-Boy and Logan Tom; they are likable boys who are similar to so many teens as they graduate from high school: full of themselves and life; not sure what they want or need to do; and scared to death of what it all means. This book is funny, fun, serious, deals with issues such as friendship, drugs, and making really important choices in life. Living in Santa Barbara I know people who are life-long surfers, who check the swells each morning and hit the waves before and after school/work so the characters in this book resonated with me. But, you don't have to live in a beach town to relate to the main characters.
One of the issues in Surf Mules is the consequences of making choices. I have found myself thinking about this a lot lately. At what age do we really understand the consequences of our actions? I thought it was pretty early on, say by 9th grade, but I am starting to change my mind. Teens really don't get that decisions they make right now affect so many people around them and that the consequences can be dire and long lasting.
I am very excited that Greg Neri agreed to do an interview with me! Here it is...

On your website you say you hope to get teenage boys into reading. How do you think we can motivate young men and boys to read?
As a writer, I try to write books they can relate to, that surprise them and draw them in. I talk about how finding Phantom Tollbooth changed me from being a non-reader into a reader and writer. I believe everyone has a book out there they can connect to, that will make them sit up and change their concept of what they think a book is and what a book can do. They just have to find it. So I am trying to make those books that some non-reader will find.
What do you think makes a good “guy” book?
Unusual, compelling, tough, and funny stories with real guy characters, real guy relationships, a book that’s not too thick, with graphics or illustrations, and cool cover!
What book are you working on now?
I have a graphic novel coming out next year called YUMMY, which is based on the true story of an 11 year old gangbanger who tragically made the cover of TIME magazine. My next novel is called GHETTO COWBOY (2011) which is inspired by a real life neighborhood in the mean streets of Philly where urban black cowboys have existed for generations. Then a kind of a YA thriller called CAUGHT which deals with that thin line between unrequited love and stalking.
Surf Mules is about Z-Boy and Logan, surfers in southern California. Were you a surfer growing up? What about now? Is there any part of you that is in Z-Boy or Logan?
I grew up in that area and surfing was all around me, though I was more of a skate rat and bodysurfer. My days on the board were cut short but I love the ocean. Only now I live in Florida where there are no waves! I’m definitely more of a Logan.
What was your inspiration for Surf Mules?
I befriended a real life surf mule and the stories he told me were so incredible, outrageous, funny and tragic that I knew there was a great story in there.
Do you have a favorite scene or character in Surf Mules?
I have a fondness for the funeral at sea for Fin. That was a real life scene I stumbled upon and was the initial spark and the first scene written.
Where and when do you like to write? Is there anything you need to have with you during the process?
I write at my desk in the mornings. I can’t write anywhere else really, aside from scribbling notes. That’s where it all happens. What I need is to be done eating, reading the paper, going through emails and have a full cop o’ joe. Though sometimes I might catch the inspiration late at night and run with it.
How has technology affected the way you write or the way you publicize your books?
I can’t believe I once wrote on a typewriter. I love computers and it has allowed me to work as quickly as my mind does, especially in the rewrite. And social networking has connected me to soo many people: writers, readers, teachers, librarians and teens. It’s really amazing. I have met so many more people than I could have even 15 years ago. It makes it much more possible to reach out and find an audience. I love it.
Are you going on tour for Surf Mules? Where and when?
Just wrapped up 3 months of events that took me from Brooklyn to Nashville, St. Louis, Philly and all around Florida. We’ll see how next year shapes up, but I want to stay home for awhile!
How does it feel to see your books in book stores?
It’s cool to see my book next to some great author. Even better is seeing it in the hands of young people. Even better is seeing or hearing about a young man who has never read a book of fiction before, who read and finished one of my books. That has happened quite a bit.
Have you heard much from your readers? Do you have a favorite comment or question that you have heard?
All the time. My favorite comment was from a girl who held my book close to her and with almost tears in her eyes said “If there were more books like yours, there’d be more readers in the world.”
Who is your favorite YA author to read and why?
That is a loaded question because there are so many great ones (there’s a reading list of favorite books on my website). I often say I am more inspired by authors as human beings than their actual writing. Seeing how they live, write and relate with their readers is a real inspiration.
Who would you like to meet and why?
I really like meeting other writers that I’ve admired and I’ve been lucky to actually get to know many of them. But maybe you could get me a meeting at the White House?
If you couldn’t be an author, what would you do?
In my dreams, play opposite of Kobe Bryant. In reality, I’ve been a filmmaker, animator and new media producer, though maybe I could also work at Home Depot. I like building stuff.
Posted by Helen's Book Blog