Review: Murder in the Name of Honor (Rana Husseini)

I wanted to read this book months ago when I ordered it for my school's library, but the Women Unbound challenge pushed me to read it sooner rather than later. All I can say is "wow". My mind was racing with thoughts and counter thoughts as I read this book. I felt like I had a running narrative going the entire time. I really should have written down my ideas, because I'll never remember all my thoughts to put them into this blog. 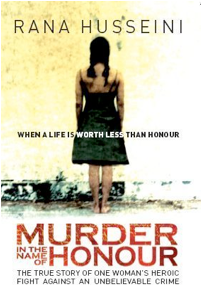 Title: Murder in the Name of Honor: the true story of one woman's heroic fight against an unbelievable crime  (This is the second book that I've read for the Women Unbound challenge and it's for my "moms" book group)

Summary: (from the inside flap) Chewing gum, laughing at a joke in the street, wearing make-up or a short skirt, choosing a boyfriend or husband, or being raped by a brother. All have been cited as 'honorable' motives for murder

Rana Husseini's hard-hitting and controversial examination of honor crimes is a fearless, groundbreaking account of a topic that can no longer be ignored. Claiming the lives of 5,000 women every year, the practice is common in many traditional societies around the world, as well as in migrant communities in Europe and the USA--where the incidents are becoming increasingly frequent. These so-called 'honor killings' are usually carried out by a relative as an act of purification to restore the family's honor.


Breaking through the conspiracy of silence, Rana Husseini gives voice to the thousands of women who have lost their lives, whose murderers often receive encouragement, admiration, and mitigated sentences. In this book, she describes her battle to change outdated laws and expose those countries that still, even today, legally allow killers who claim to have struck in the name of honor walk free.

Review:  Where do I even begin to put my thoughts about the issue of 'honor killings' into words? Let me start first with the book itself. It is well-written and I liked that Husseini combined personal stories of the victims and their families amongst the legal and political struggle that she is so much a part of. Though Husseini is from Jordan and much of the book is devoted to stories and the issue within her own country, I am really glad that she devoted a chapter to 'honor killings' in other countries. While she mostly covers immigrant populations in the Middle East, she also has sections on the UK, the US, and Central/South America. It is truly an uphill battle for human (women's) rights groups who choose this as their cause.


I am going to put my thoughts about this book in bulleted format since that will more easily allow me to get it all out before my head explodes. And, at this point, I'd like to say how excited I am that I am now blogging on a personal book blog since some of this stuff I won't post on my school's library blog!

Women Unbound Connection: This book more than many clearly belongs in this challenge! Womens' right to safety, freedom, choice, independence, and respect are at the heart of the issue of 'honor killings'. 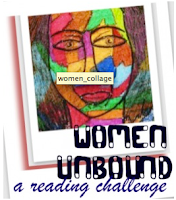