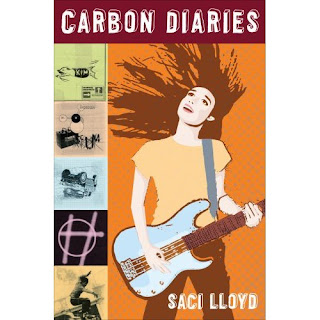 Title: Carbon Diaries 2015 (this is an Amazon link, the author and book don't have a website)
Author: Saci Lloyd
Genre: Fiction/Environmental Lit

Summary: (from the flap) The enviro's gone completely mad. After the Great Storm hit London everyone was like, It's 2015 already. Stop global warming now. So the gov volunteered Britain to be the stupid guinea pig freak and ration carbon while the rest of Europe flew to Ibiza on holiday.

At first it was weird--blackouts, looting, fuel shortages. But I still had my lifeline--my band, the dirty angels. And the hope that Ravi would notice me. Eventually.

But then everything got bare twisted. All winter the country was a frozen tundra. Then after months of no rain, Europe literally caught fire, and the mayor had riot police shoot protesters with live bullets! I'll give him a carbon footprint--right in the arse.

Now, as I write this, the highest category storm in history is headed straight for us. People have died all around me this year, and I'm dead scared. I just wish things would go back to normal, but I don't know what that means anymore.

Review:  I lived in London a couple times and have visited often, so I loved the setting for this book. The author also really captured the language of young Britain without totally confusing her American readers. I liked the main characters and her supporting family and friends and I believed the situation (though perhaps later than 2015). There are references to New Orleans' experience with hurricane Katrina and other real events, which contribute to the feeling that this book could really happen.

At the end of the book there is a cleverly done glossary (via an email from the main character's American cousin) and websites for the reader to visit if one is interested in environmental issues. Here are a few of them in case you are so inclined: